Special Olympics Spring Games are just around the corner across the state and twins Jean and Jan Finn, 51, of Lincoln are looking forward to competing in the Special Olympics Illinois Central/Area 10 games – something they’ve been doing for nearly 30 years. They work very hard at raising money for the Plunge. They raise their money by asking people at work and in the community. This year they once again raised an impressive amount. Jean raised $813.75 and Jan raised $868.85. “Each year, we try to raise more and more money for the Polar Plunge,” said Jan. Now that Plunge season is over, the girls are preparing for Spring Games. They practice once a week with about 10 other athletes from Lincoln Park District on Sunday afternoons. “At practice, we work on handing off the baton, walk, run and standing long jump,” said Jean. They have won multiple gold medals during Spring Games in the past, and they are hoping their hard work pays off in gold again this year and that they will advance to Summer Games in Normal in June. From left, Jan and Jean Finn an teammates Sally Spear and Shirley Logan display their medals

They both enjoy Spring Games for different reasons. “My favorite part of competing is seeing my friends compete because I like to cheer them on,” said Jan. While Jan enjoys the social aspect of Spring Games, Jean likes to compete. “I like athletics because I like to do the standing long jump, and I love to run,” said Jean.

They have seen many changes in Spring Games since they began competing nearly 30 years ago. The biggest change, they said, is the growing number of people with intellectual disabilities who are now participating in Special Olympics and competing in Spring Games. For Jean and Jan Finn, the more athletes, the better – to socialize with and compete against.

Raffle tickets are available for a Taurus 9mm PT111 G2 handgun. Tickets are 1 for $10, 3 for $20, or 10 for $50. Contact Brian Stevens, or Monty Mittleman in Clincal Services at Lincoln Correctional Center to purchase tickets. You must have a valid FOID card and pass a background check in order to win. Any questions, contact Brian Stevens. The drawing will be held on June 15th, 2018. 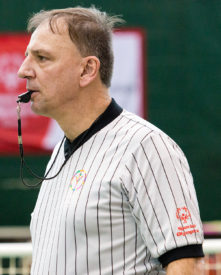 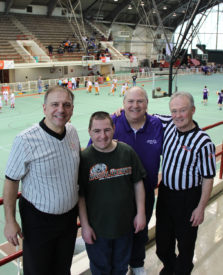 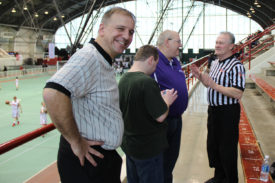 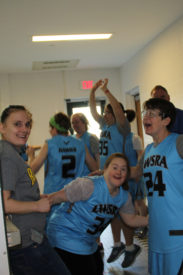 This March Madness weekend, Bloomington-Normal was full of Special Olympics Illinois’ athletes and coaches playing basketball like champions! Both the Shirk Center and Horton Fieldhouse were full of competitive athletes and excited coaches. I was able to spend some time with the New Lenox Lady Hawks and their coaches during their morning game against the Adams Country women’s team.

I asked long-time volunteer coach Ralph Krauss what his favorite thing about coaching is. “Seeing the little moments, like an athlete making a basket for the first time,” he replied with pride.

Coaches like Ralph have made the Lincolnway Special Recreation Association an incredible place for the athletes of New Lenox since the 1970’s.  Here, they have programs for athletes with intellectual disabilities, from preschool through adulthood.

Tami Pareti, the Senior Recreation Specialist at Lincolnway Special Recreation Association, explained that many of their athletes have been with the program for upwards of 20 years. With the help of volunteers like Coach Krauss and many others, Lincolnway has recently acquired their own facility that is home to six Special Olympics teams and five adaptive teams, along with many other programs. 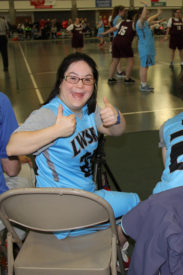 The Lady Hawks gave their opinions on what it means to play for the team. Paige met her best friend Nicole at basketball practice. Lexi has participated in basketball, swimming, track, and bowling (just to name a few!) for over twenty-five years. Jenna, who received the best spirit award this weekend, demonstrated incredible sportsmanship while cheering on both her teammates and her opponents. Finally, Tami, who has been with the program since childhood, overcame her fear of spending the night away from home this weekend! These milestones, experiences, moments of joy and opportunities for building life-long relationships would not have been possible without the unwavering support of Lincolnway’s families, coaches, staff and volunteers.

Thank you Lincolnway Special Recreation Association for helping to transform the lives of our Illinois athletes and their families. Congrats to the Lincolnway Lady Hawks for a fantastic basketball season!