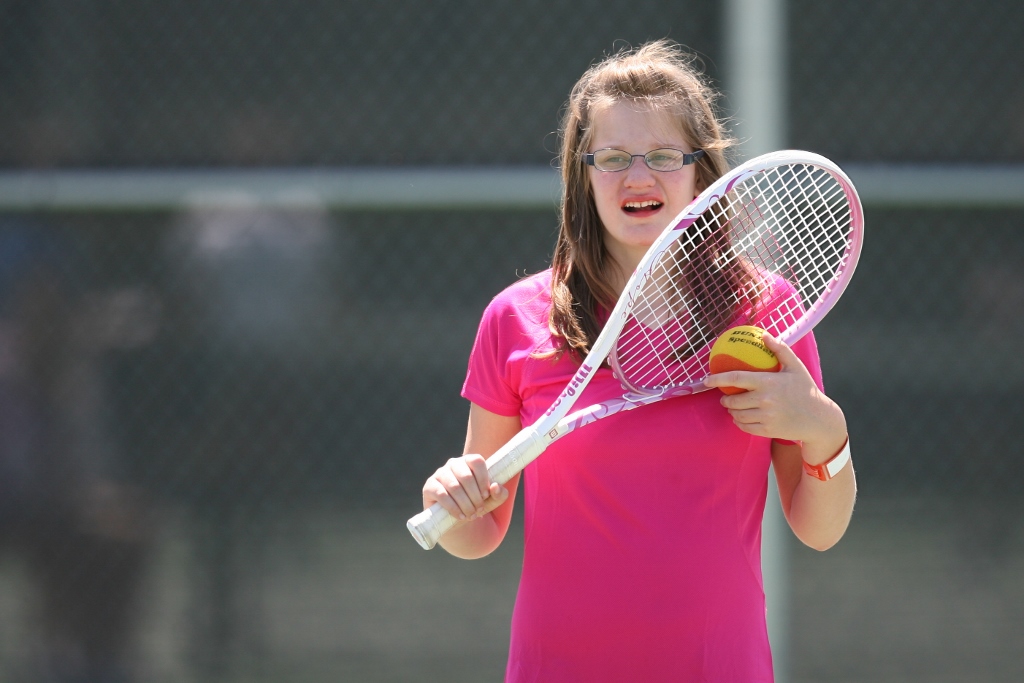 For Jennifer Fritz, 15, a three-sport athlete, tennis is her most competitive game. She has been competing in Special Olympics tennis for five years and has even competed at the Special Olympics National Tennis Invitational in South Carolina for the last three years. Jen Fritz serves the ball during the 2012 State Tennis Tournament.

Jen began taking tennis lessons at Homewood-Flossmoor Racquet Club in a mainstream system. She had trouble keeping up with her peers, so it was suggested that she try Special Olympics. Because of her Fragile X Syndrome, Jen has slower processing times, trouble with eye contact and motor skills issues, says Diane Fritz.

Through Special Olympics, they were able to break down the skills for Jen so she could understand the game. “With Special Olympics, she can play tennis. Without it, she couldn’t play as well as she is now. I think it’s great! Now she knows how to serve and how high the ball needs to go. She improves every season, she keeps getting better,” said Diane Fritz.

Jen says her Special Olympics coaches have made tennis easier to understand. “I’ve learned hot to hold the racquet and serve the ball,” she said. “I’m getting better. Now my skills (like serving) are getting better.”

Jen has been playing short-court doubles with Gina Rotundi from the beginning. “They are so compatible, a great team,” said Diane Fritz. “They have an amazing friendship, relationship. They have become best friends.” They also do many things together outside of Special Olympics, like “going to see movies, having her come over to my house. We talk a lot,” says Jen.

Not the only Special Olympics athlete in her family, Jen’s younger sister, Maria, 12, participates in bowling. The Fritz family is one full of athletes, including Jen and Maria’s two older brothers who also played a range of sports growing up.

“I think it’s been a good thing for my boys to see that you don’t have to be really athletic and be a star athlete to do a sport. They’re very proud of their sisters. Whatever level you’re at, you can compete. It’s been good for them to see that too,” said Diane Fritz. Jen Fritz and her doubles partner, Gina Rotundi, posed with Andrea Holmquist and Wendy Stout after playing a doubles match.

Diane Fritz said she has seen many positive changes in her daughters from being involved with Special Olympics.

“I think it makes them more confident. Maria’s very confident. No matter where Maria is, she’s very confident. But Jen, I think, has always been on the quieter side, more shy. She has social anxiety, so it has totally brought her out of her shell. (Special Olympics) has really been a wonderful thing for Jen.”

To transform the lives of athletes like Jen, donate now.Donate Today