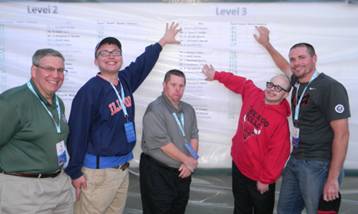 From Oct. 17-21, five Illinois golfers had the thrill of competing in a high profile national golf tournament. They joined 171 other Special Olympics golfers from the United States and Canada at the 2013 Special Olympics North America Golf Invitational Tournament, presented by KPMG, at the Stockton Seaview Hotel & Golf Club in Galloway, N.J.

Unified Golf pairs a Special Olympics athlete with a Partner without a disability, competing against other Unified teams. The Brizzolara-Chmielewski team finished with a 3-day total score of 413 and received a participation ribbon in Division M6. The Schmidt-Dauphin team competed in Division M1 and finished with a total score of 257 after 3 daily scores of 87-80-90 – good enough for the gold medal. View photos of the Illinois delegation at the National Golf Invitational.

All six members of the delegation savored the whole experience. “Throughout the weekend, the examples of camaraderie among the athletes and the caring and generosity of the KPMG volunteers and others was overwhelming and created more of a family environment than one of competition,” said Jaehn.

For Steven, his life-changing experience went beyond golf; it was his first time on an airplane and the first time so far from home without his family. “I’m just trying to do my best – I’m doing this for my father,” he said. His dad had passed away a number of years ago and was Steven’s inspiration. Mr. Weith would have been proud of his son who took a silver medal in his division.