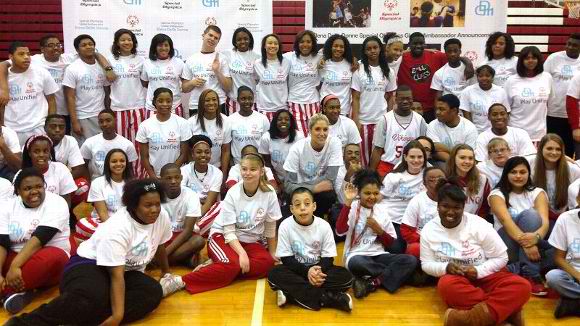 Special Olympics announced today that Elena Delle Donne, a professional basketball player with the WNBA’s Chicago Sky and 2013 WNBA Rookie of the Year, now joins the Special Olympics family as the movement’s newest addition to the Global Ambassadors.  Delle Donne will support Special Olympics’ efforts in promoting acceptance, inclusion, respect and dignity for people with intellectual disabilities and will kick off her involvement with a special assembly at Homewood-Flossmoor Community High School in Flossmoor, Illinois.

As part of her role as an Ambassador, Elena will invite Special Olympics athletes to join her at her De11e Donne Skills Academy and will work to promote basketball development within Special Olympics, particularly among girls and promote social inclusion through Unified Sports®.  Additionally, she will participate in upcoming NBA All-Star Game activities and take part in key initiatives for Special Olympics including Spread the Word to End the Word Day® on March 5th and the Motor Activities Program (MATP), in which her sister has been an active participant.  MATP provides specialized training for athletes in skills that may lead to participation in a traditional Special Olympics event.

Today, Delle Donne will join an assembly with hundreds of students from Flossmoor to talk about the importance of activating youth to promote inclusion in schools via Unified Sports® such as basketball.  Unified Sports pairs players with intellectual disabilities with players without intellectual disabilities to play together.  Students from the school and from around the world will welcome Elena in real time by tweeting her using #WelcomeElena, and will also be able to ask her questions about her role as a Global Ambassador and involvement with Special Olympics.  Elena will host a Facebook chat later in the day from her page atElena Delle Donne at 5:00 p.m. EST.

Following the assembly, Elena will host a unified basketball clinic with Homewood-Flossmoor High School’s varsity girls’ basketball team and local Special Olympics athletes.  Homewood-Flossmoor Community High School is part of Special Olympics Project UNIFY®, an education-based program that uses the sports and education initiatives of Special Olympics to activate youth to promote school communities where all young people are agents of change.  Funded by the U.S. Department of Education, the goal of the program is to foster respect, dignity and advocacy for people with intellectual disabilities. Since 2009, more than 35 U.S. state programs have engaged in the mission of Project UNIFY to engage students and schools in a host of core activities like Unified Sports®.

Janet Froetscher, CEO of Special Olympics International, extended her congratulations, “Elena Delle Donne is a great addition to our Special Olympics family.  Our goal is to raise awareness about the abilities of people with intellectual disabilities.  Through sports, we showcase the skills and dignity of our athletes.  Elena is a powerful force that will help us deliver this mission around the world.  Not only is she a highly skilled athlete, but her passion for our organization shines and I know she will help us reach many more athletes.”

About Elena Delle Donne
Elena Delle Donne readies to enter her second year with the WNBA’s Chicago Sky as one of the premiere talents in the league and a rapidly emerging face of women’s basketball around the world. Indeed, at just 24 years old, Delle Donne has firmly established herself as a leader of the next generation of great American women’s basketball players thanks in large part to a decorated 2013 WNBA rookie campaign that saw her take home Rookie of the Year honors as well as enjoy a run of four consecutive Rookie of the Month awards. Moreover, the 6-foot-5 Delle Donne, who was selected second overall in the 2013 WNBA Draft, finished as the top vote getter for the WNBA All-Star game and made a run at the WNBA MVP award, tallying third in the voting overall.  To top it all off, in what is perhaps the biggest testament to her ability as both a player and leader, Delle Donne guided the Sky to the franchise’s first playoff berth in its eight year existence. As a prep athlete in Delaware, she was three times named the Gatorade Player of the Year in the state before enrolling at the University of Delaware as a means to, above all else, remain close to her tight-knit family. While there, Delle Donne completed an extraordinary collegiate career, finishing as CAA conference player of the year three times and as a consensus first team All-American her senior year, she led her team to its first ever NCAA Sweet Sixteen while ranking first in the nation in scoring in 2013 with an average of 28.1 points per game.  To learn more about Elena, visit www.elenadelledonne.com. Connect with her on: Twitter @de11edonne; fb.com/de11edonne, and on Instagram at “de11edonne.”