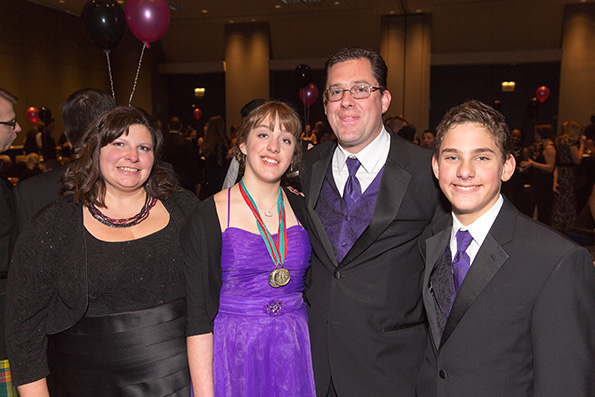 Justin Grammer, 12, of Joliet, was hanging out at a relatives house when his mother telephoned. The boy immediately thought, “Oh, man, am I in trouble now.” Justin, who prefers comic books to compositions, had won the “Special Olympics Illinois Share Your Story” contest with his 424-word piece “My Big Sis, My Hero,” about his 13-year-old autistic sister Jennifer Grammer, a Special Olympics swimmer.

The prize was attendance at Friday’s “First Look for Charity” event at McCormick Place, a pre-opening gala of the 2014 Chicago Auto Show.

The gala benefited 18 charities, according to www.specialolympicsfirstlook.org.

This was the first time he had ever won a contest, Justin said.

Jennifer Grammer of Joliet, Justin’s mother, couldn’t be more proud of her son.

“He truly has a heart and passion for Special Olympics,” Jennifer said. “[Justin and Jessica are] best friends. The relationship they have with each other is unbelievable and beautiful.”

When Jessica was diagnosed with autism at age 2, she was nonverbal, nonsocial and expressed herself through “frustration and anger.”

Oftentimes, Justin was at the receiving end of Jessica’s outbursts, Jennifer said, but that did not deter his commitment to her.

“No matter what she did to him,” Jennifer said, “he loved and adored her.”

Despite Jessica’s challenges, she returned that love and adoration. Jessica talked about swimming, Special Olympics, about going to state competition three years in a row and the “medals she had won.”

“Last year, she swam her 50-meter backstroke,” Jennifer said, “and ended up being the fastest woman in the state of Illinois for the backstroke.”

Those victories are Justin’s victories, too. Not only are this brother-sister home-schooled duo each other’s classmates, Justin attends all of Jessica’s swim meets and practices with her six days a week.

“I get in the water and we actually race,” Justin said. “Whatever she sees me doing, she likes to do, too.”

Justin is quick to point out the benefits he’s received from Jessica and their association with Special Olympics.

The other participants, Justin said, are friendly, “happy all the time” and persistent in their quest of success.

“They’re totally different than what you see in everyday life,” Justin said.