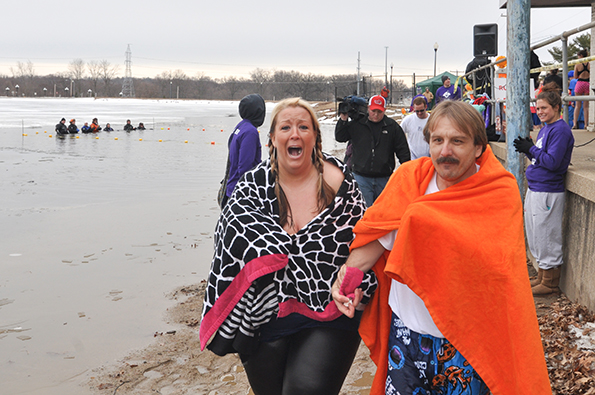 Unlike most snowbirds, Special Olympics athlete Joe Grove leaves sunny Arizona to return to his home town of Flanaga, Illinois, each year because he misses winter weather. While here, he has participated in the Special Olympics Polar Plunge for the last two years.

He first became involved with the Bloomington Plunge last year after hearing about the event on the radio. Grove reached out to a Pontiac radio station who then put him in contact with Jim Fitzpatrick of WJBC in Bloomington. This year was his second year helping to promote the Bloomington Polar Plunge and his second plunging with Radio Bloomington (WJBC, WBWN and WBNQ), this year as the team captain. The most important message he wants to share is to “continue donating to Special Olympics and to the Plungers, for the 21,500 intellectually disabled athletes,” said Grove.

His favorite part about promoting the Special Olympics and the Polar Plunge is getting out into the community and letting people know about the event. Not only did he jump into Lake Bloomington but he also solicited local businesses to donate to the Plunge.

Grove has been a Special Olympics for 23 years in Arizona but travels to Illinois to participate in the Polar Plunge. While in Arizona, he helps at The Olive Branch, a faith-based organization that provides services to adults with intellectual disabilities. During his time in Illinois he volunteers at the Prairie View Mennonite Church working relief sales as well as other fundraising and service events. He also enjoys taking walks and riding his bike.

For Grove, “watching the other athletes go out there and participate” is what inspires him. Grove said Special Olympics gives him and the other athletes the opportunity to show society their strengths and gives them the prospect to show how people with disabilities deal with challenges on a day-to-day basis. Grove trained in Arizona to become a Global Messenger and has been sharing his stories for 10 years.

Grove feels this year’s Plunge was a success and that it should only continue to grow. He felt great that he did it and was able to support all of the other athletes. He doubled last year’s fundraising efforts and raised more than $2,000 this year.

“This has been awesome” said Grove. With high hopes and a passion for Special Olympics, he looks forward to working hard to continue helping the Bloomington Plunge grow and support his fellow athletes.