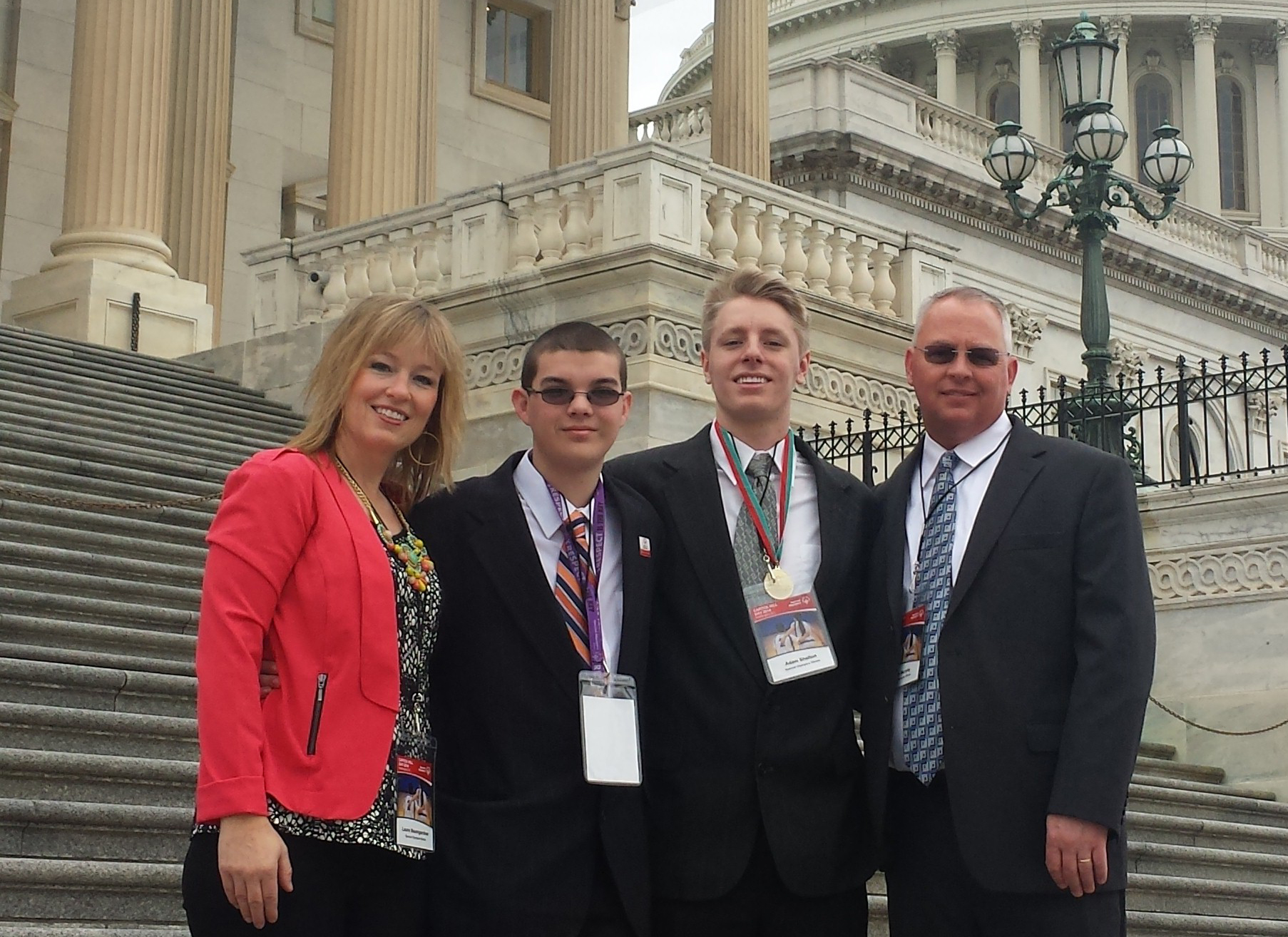 John F. Kennedy once said, “Things do not happen. Things are made to happen.” This sentiment is precisely how I feel about our trip to Washington D.C. for the Special Olympics Capitol Hill Day. On Tuesday, March 11, my Special Olympics athlete, Adam Lopez; his partner, Adam Shelton; Kevin Murphy, Vice President of Business Operations; and I all met at the Central Illinois Regional Airport in Bloomington to embark on a once-in-a-lifetime trip.

It was the first time any of us had visited our nation’s capital. It was also the first time Adam Lopez had ever flown. I admit I was a little nervous about him flying. He kept saying to me, “Chill Ms. B. I will be fine!” And he was. Adam flew like a pro. He even was sure to collect souvenir magnets from the different airports we visited (Atlanta, Washington, D.C. and Detroit). Once we arrived in Washington, D.C., we went right to work. We went through specialized training to follow up the webinar training we received prior to arriving in D.C. We learned the importance of our meeting with the legislators and just what we were hoping to achieve in our day of meetings. “The Ask,” as it is called, was to request the legislators’ support in the Reauthorization of the Sport and Empowerment Act which provides short-term funding for Project UNIFY and Healthy Athletes, and to ask their support of the Eunice Kennedy Shriver Act (EKS Act) which would provide long-term funding for these important programs.

We met with our escort from Special Olympics International, Nicole Engdahl. She was awesome! She listened to our stories, and she helped us decide what we would say during our meetings the next day. She helped us highlight our special stories which we would share with the legislators to make our appeal more personal. After a wonderful meal, we all retired to our rooms to practice what we would say the next day. We were all excited and a little nervous. Finally the day arrived! The boys dressed up in suits and ties and definitely looked the political lobbyist part. As we loaded the buses to head to the Capitol, we rehearsed our material to discuss. We pulled up to the Capitol and were awestruck.  What a feeling it was to stand in front of our nation’s Capitol building! Our group took numerous pictures and even a couple of selfies.

We then headed to the House of Representatives side for our first meeting. We met with Representative Brad Schneider and had a fantastic first meeting. He was already a co-signer for the EKS Act, and he was so kind and supportive. He gave us numerous tips on how to talk with the other legislators and even told us he would call several of the other legislators we were going to meet with. It was a fantastic way to start the day.

Throughout the rest of the day, we moved from building to building, meeting to meeting. We had a total of nine meetings, so it was a busy, packed day. Overall, the legislators were very enthusiastic in meeting with us and were very positive. We felt that the meetings were successful and look forward to hearing how the legislation moves forward. Each of us truly felt that the legislators would support the re-authorization and several would become cosponsors of the EKS Act. Several highlights of the day included meeting with Representative Tammy Duckworth, who is an Iraqi War veteran. She is a double-amputee and was such a positive person. During lunch in the Senate building, we saw a four star General with his bodyguards and spoke with another General in an elevator who joked with the boys in telling them that he got his decorations at a local store. At the end of the day reception, Adam and Adam got to meet Special Olympics Chairman Tim Shriver. What a nice man who took the time to talk to the boys and get a picture with them. Adam and Adam kept saying, “I can’t believe we just met Tim Shriver!” The entire day was so impressive.

On the final morning, we had several hours to do some sightseeing before heading to the airport. We took a taxi over to the Mall on a very cold and blustery morning. Since it was so cold, we had the memorials to ourselves. Being the only ones at these famous sites was very special. We visited the Washington Monument, the World War II Memorial and the Lincoln Memorial before we felt that we would all have frost bite if we stayed much longer. Adam and Adam were completely impressed with the Lincoln Memorial. I think being from Illinois and studying Lincoln made it especially meaningful.  Due to the cold weather, we decided to quickly visit the White House before heading back to the hotel. Each of us wished we would have had longer to visit, but were thrilled to see what we did.

Adam, Adam, and I feel truly blessed to have been chosen to represent Illinois. Getting the opportunity to speak about how wonderful Project UNIFY has been for our school was so important to us. Nicole Engdahl and Kevin Murphy are remarkable supporters of the Special Olympics mission. We each have grown from the experience and look forward to another time in which we can share how awesome Special Olympics and Project UNIFY are for the students at Pontiac Township High School and for all people with disabilities and their families across the state of Illinois.