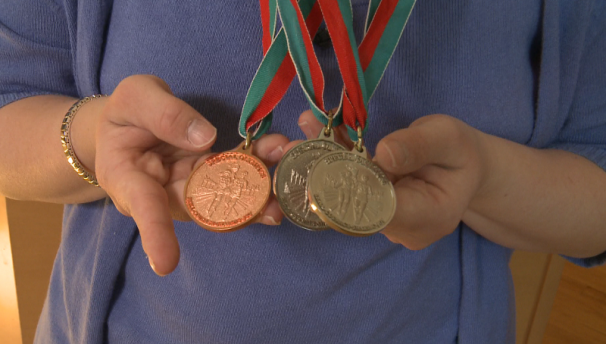 Reposted with permission of WGN and Living Healthy Chicago

Kristen McInerney began participating in Special Olympics when was she was in fifth grade.

“I knew it would impact my life in so many ways,” she says, a poster with her picture on it sitting behind her.

“She’s just a tremendous individual,” Jim Corrigan, Chairman of the Board of Directors, says. “She would be what we hope every Olympic athlete could attain.”

She has hundreds of metal, some stored safely in a box under her bed, others displayed prominently among pictures of her friends and family. But McInerney says it’s not the medals she cherishes most.

“I realized things that I never knew I could do before,” she says. “I never knew that I could dive or swim up until I was ready and had courage and was ready to push myself. And mentally, with making new friends and working as a team and getting along with my teammates.”

Corrigan says it’s important for all athletes to gain the confidence and courage McInerney mentions.

“It’s important for individuals with intellectual disabilities to be given the opportunity to show the abilities they have,” he says. “They’re entitled to it, you know?”

For now, Kristen will continue winning medals and hearts and urges everyone to lead as active a lifestyle as they can.

“If you don’t do anything, you’re not going to get anywhere in life,” she says. “If you get up and be active, go swimming, go on a hike, it’s giving yourself courage but it’s also confidence. Your confidence to say … ‘I never knew I could do this but I did it and it’s incredible.’”