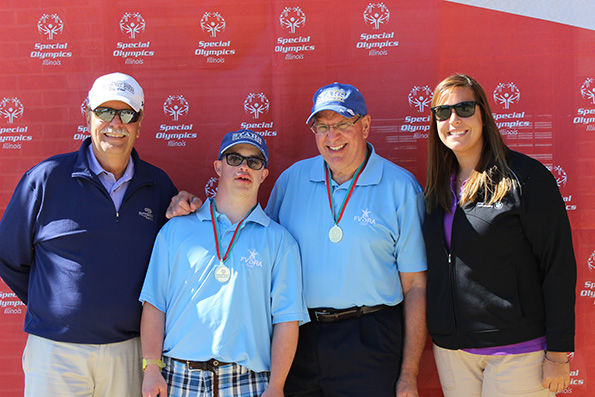 Longtime Special Olympics Illinois volunteer Bob Gavelek is retiring on Oct. 31 from his career as a golf pro. Each year, Gavelek travels to the state golf tournament in Decatur, not only to cheer on the athletes but also to make sure everything is in place and held up to Special Olympics Illinois standards. “Bob treats the athletes like golfers and gives them the quality and respect that they deserve,” said Amy Kaylor, Manager of Sports and Competitions for Far West Suburban/Area 2.

Among the athletes that Gavelek works closely with is Ben Brizzolara. Ben has been competing in golf for about 22 years; he started his journey with Special Olympics in junior high. Bob was Ben’s first Unified golf partner. Currently Gavelek and his daughter, Gina, caddy for Ben and his Unified partner Mike Chmielewski (shown above) at competitions. Gavelek also gives lessons to Ben weekly on Sunday mornings.

Gavelek is not only a teacher to Ben but also a friend. Ben described Gavelek as “warm, funny, genuine, honorable and a hero, friend, and supporter.”

Although Gavelek is retiring, he still plans to work with Ben. Instead of Ben having to wake up for early golf lessons on Sunday mornings, he will now be able to golf in the afternoons. The two of them have a strong personal relationship; their families are close as well. “Bob and his family are the kindest and sweetest human beings,” said Penny Brizzolar, Ben’s mother. “They are all completely involved in Ben’s life. We even go out to dinner with their family; we have a great personal relationship with them. We love them.” Gavelek feels very fortunate to be involved with Special Olympics. “It has been a fantastic experience getting to know the athletes, coaches and families. The support of the Special Olympics community has been great,” he said.

In retirement, Bob plans to do some traveling with his family and begin golfing again. He has not been able to golf much since becoming a pro because he has been busy running the golf course. Although his career as a golf pro is coming to an end, his work with Special Olympics is not. “I never want to NOT do Special Olympics,” said Gavalek.