Josh Padilla, Who Has Autism, Scores Touchdown for Leyden 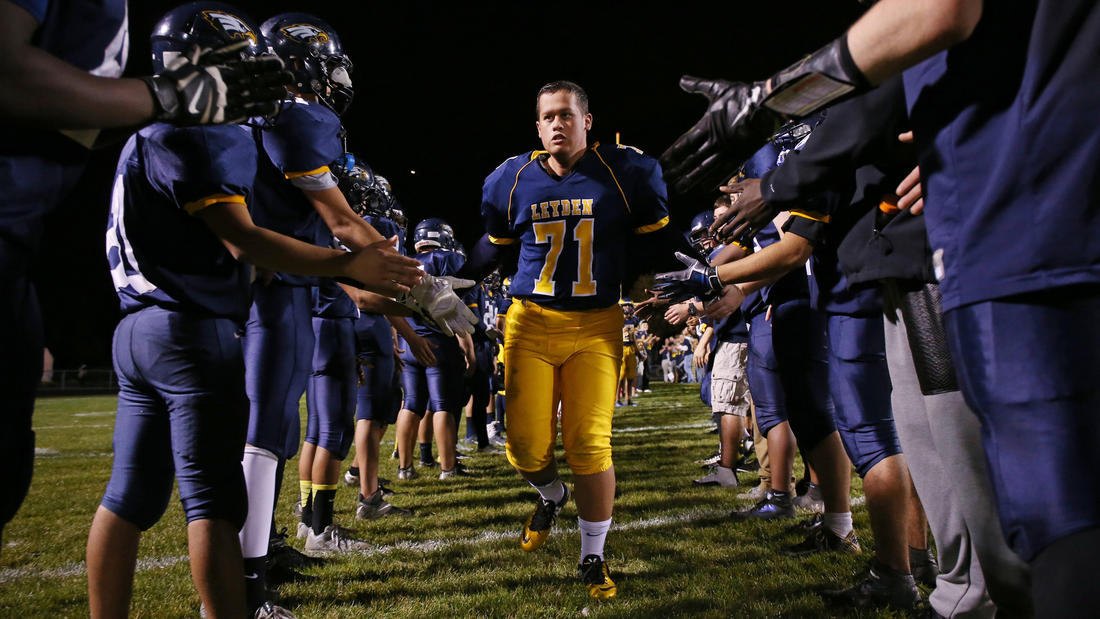 Josh Padilla wears No. 71 on game days. He is listed as a senior kicker on Leyden’s roster. He is a team captain and walks to midfield for the pregame coin toss.

The guy with autism.

But Friday night (Oct. 24, 2014), Josh became the guy with autism who scored a touchdown on a senior night. On a set play after the opening kickoff, Josh took a shuttle pass from quarterback Tom Pajor and ran 66 yards to the end zone.

Josh’s parents, Dan and Kim Padilla, teared up in the Leyden stands as the entire Eagles team mobbed their son. Josh Padilla cries as he gets a pat on the back by head coach Tom Cerasani, as Josh’s parents, Dan and Kim Padilla, walk onto the field on Senior Night before the team’s final game of the season. Photo by John J. Kim, Chicago Tribune

“Well, how about that?” Kim Padilla said, wiping away tears. “And to think, five years ago he wouldn’t go out at night. He was scared of the darkness.”

The play came as a surprise to most fans in attendance. The Proviso East coaching staff agreed to the play. The Eagles practiced for Josh’s big moment all week. Josh’s touchdown did not go on the scoreboard, but the playset the pace for Leyden’s 49-9 victory.

“We were just trying to get him to run (in practice), and he wouldn’t want to run,” Pajor said. “I’m like, ‘Josh, you have to run! You’re scoring a touchdown here.’

“I told him I was going to chase him. He was like, ‘All right, you’re not going to catch me.’ So he ran, and I was chasing him.”

Before the game, Josh ran onto the field during senior introductions and began to cry as he gave coach Tom Cerasani a bear hug. Kim Padilla said Josh was overwhelmed by the attention and told her he was sad football was coming to an end.

Josh Padilla rides the bus with teammates each weekday to practice at East Leyden High School.

On a cloudy and cool Thursday, Josh, a senior at West Leyden, was first off the bus. He took long, deliberate strides to the school’s front door, which he held open, smiling as he waited for lagging teammates.

He then moseyed onto the field, poking Pajor under the ribs. He held his helmet and gloves in his left hand and wore Nike cleats and a faded No. 46 practice jersey.

Josh was born June 10, 1997, as Kim’s only child. Dan had two children from a previous marriage. Dan, outspoken and confident, thought his son inherited his wife’s calm demeanor. He didn’t suspect autism, not even when a pediatrician recommended speech therapy, which was unsuccessful.

Still, Kim scheduled an appointment with a neurologist, who needed only a few minutes to diagnose Josh with autism.

Autism spectrum disorder affects about one in 68 American children, according to the Centers for Disease Control, and boys are five times more likely to have the disorder. Kim Padilla said Josh’s autism falls in the middle of the spectrum.

“He knows more than what he lets on,” she said. “He talks, but some don’t. You saw him cry. Sometimes with autism, they don’t have that emotion.”

An athlete and youth coach, Dan suggested Josh join the football team his freshman year. He knew his son might never play, but he wanted him to be more than the water boy or equipment manager. Josh needed to be part of the team.

“There’s not much individuality in football, so that’s the easiest for him being a member of the team,” Dan said. “My goal is to bring further awareness to autism. If I could educate 50 boys on the football team … that was my goal, and him being a senior I think it’s almost accomplished.”

“No matter what your standing is or what kind of ability you have, being part of something makes that person feel so much better, like he’s one of the gang, one of the group,” Wolf said. “You could see his personality develop throughout the years. I think a lot of that is being with the football players.”

Dan took time off his job as a state housing investigator to make sure Josh was comfortable at the start of the 2011 freshman football season, but he returned to work after a couple of days of watching Josh stand closer to the fence than to his new teammates. So Josh kicked off to start a half of a freshman game, with the permission of the opposing coach. His sophomore year he did it again, this time without Leyden’s opponent knowing about his autism. That kick traveled only a few yards, but a teammate was assigned as his personal protector.

Last fall, varsity coach Cerasani was skeptical of allowing Josh to participate because of the inherent dangers of football. Friday marked the first time Josh played in a varsity game.

“The risk of injury for him playing football is greater sometimes because he’s not as aware of the things that are happening around him,” Cerasani said. “But the kids do a great job of taking care of him, making sure he’s in the right spot.”

One of the guys

Josh communicates mostly through innocent pranks. He hid a spare football behind his back — “I’ve got it now,” he told Pajor, his closest friend on the team — during a practice. He’s the only Eagles player who can get away with telling Cerasani, “You’re lazy!” Josh balked when after-school special educator Kevin Summerville wanted to play catch on the sideline, but eventually he agreed. He dropped the first two short passes but caught the next four.

“I’m watching you, Josh,” receiver Alex Lemon said as he pointed two fingers at his eyes, then rotated his hand to point at Josh.

Josh mimicked the gesture and briefly made eye contact with Lemon, one of the few times he looked directly at anyone during the practice.

“At first he would kind of isolate himself from the rest of the group. He didn’t really know anyone,” senior center Gunnar Schiferl said. “As the years came by, he got to know us. He’s just one of us now.”

Next year there will be no football for Josh. He’ll enter a post-high school life skills program, likely through Leyden schools or Elmhurst College, aimed at job readiness. But for one final Friday night, Josh was one of the guys.

Dan Padilla said Josh has been more comfortable playing football than participating in the Special Olympics. Josh’s special education math teacher had trouble reaching him in a classroom, but Josh opened up on the field.

“If you don’t really talk to Josh, you don’t see what a cool person he is,” Pajor said. “I didn’t know Josh before, but I’m so greatly impacted by Josh that I never would have guessed that I could meet such a cool person.”