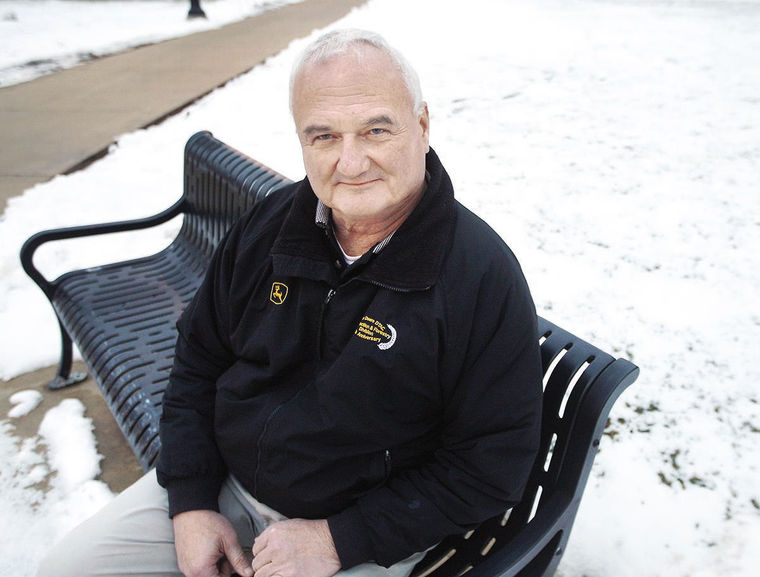 GALENA – For Jerry Tranel, nothing can hold a candle to the thrill of competition and the joy of donning a medal.

For the past 35 years, Tranel, 65, has competed in Special Olympics Illinois State Winter Games in Galena.

Last year, he won second and third place for his cross-country skiing events. He returns to the slopes at this year’s Winter Games at Chestnut Mountain Resort.

After finishing his 1K and 2.5K races – hopefully with some hardware in tow – Tranel will do as he has done every year for the past 16 years, scanning the crowd for a white-haired, bulbous face and boisterous laugh to tell of his recent athletic prowess.

For Tranel, who is cognitively impaired, volunteer Scott Price has been a constant, reassuring voice of encouragement and affirmation, dating back to their childhood in Galena as toddlers.

“When I’m done with my events, I always look for him to talk to him about how I did, reminisce about our childhood and joke around,” Tranel said. “It’s always reassuring to see his face and hear his voice encouraging and pushing me on. It’s a lot of fun out there, and Scott contributes to that, cheering us on and giving us tips to move fast.”

Price, 59, has volunteered on the alpine skiing hill for the better part of the past two decades. He was working as a snow-maker at Chestnut Mountain Resort in 1973 while on winter break from college when he met Mark Van Osdol, who would recruit him years later to help run college ski races at Chestnut and later with Special Olympics.

Immediately, Price was hooked, and has since gotten dozens more to hit the slopes year after year to coordinate, plan and motivate.

“He has done quite a lot over the years in furthering the awareness and mission of the games and challenging people to get involved,” said fellow volunteer and Galena resident Dee Vojta, 51. “The athletes love him. … His humor and laughter draws them in, and he encourages them. They consider him a friend. They share personal stories, and he is just very warm, compassionate, fun-loving and boisterous person.”

Each year, he brings a group of co-workers from John Deere, most of whom have been volunteering at the three-day winter sporting event for the past decade. Scott Price (second from left) with other volunteers at Alpine Skiing Levels 3 & 4.

The joy on the athletes’ faces, Price said, keeps him coming back each year, in addition to the friendships he has made with people like Tranel and their families. Some of the athletes have been skiing on his hill since he started volunteering, and he has enjoyed watching them evolve as competitors.

“I always say that if I can get you out here to volunteer, there’s better than a 50/50 chance I’ll have you back out here next year,” Price said. “It is such a rewarding experience to spend time with these special athletes – to see the joy, exhilaration and excitement on their faces. They’re trying to re-create what they see on TV in the Winter Olympic Games, and we try to do that to the best extent we can … to make it something they’ll remember all year long.”

Throughout his childhood, Price befriended special-needs individuals, whether it was the kid next door in Galena or Elizabeth or a classmate on the same bus. But it wasn’t until recently that he made the realization.

“I’ve just always been around a special-needs person, and back then … a lot of the time they were in the same classes we were in. And we just took care of them and helped them when they needed it, and were their friends,” Price said. “I don’t think the students now have those opportunities, because in a majority of cases the special-needs kids are now in other programs where they’re not side-by-side in the classroom with kids their same age.

“It gave you a perspective and appreciation of the challenges they have and the way they face those challenges without getting a bad attitude or feeling like they’re being picked on. It’s an appreciation and understanding that is hard to duplicate.”

One for which Vojta said she is eternally grateful to Price for helping instill in her and others. So much so that she plans to fly back to volunteer next year; she is moving to Colorado this March with her husband.

“The athletes are amazing,” Vojta said. “It could be the coldest day of the year, all the volunteers are freezing, and they’re lined up ready to go with smiles on their faces, and you won’t hear one complaint. And hugs. You are constantly greeted by hugs. Between the smiles, laughter and hugs, what more could you want?”