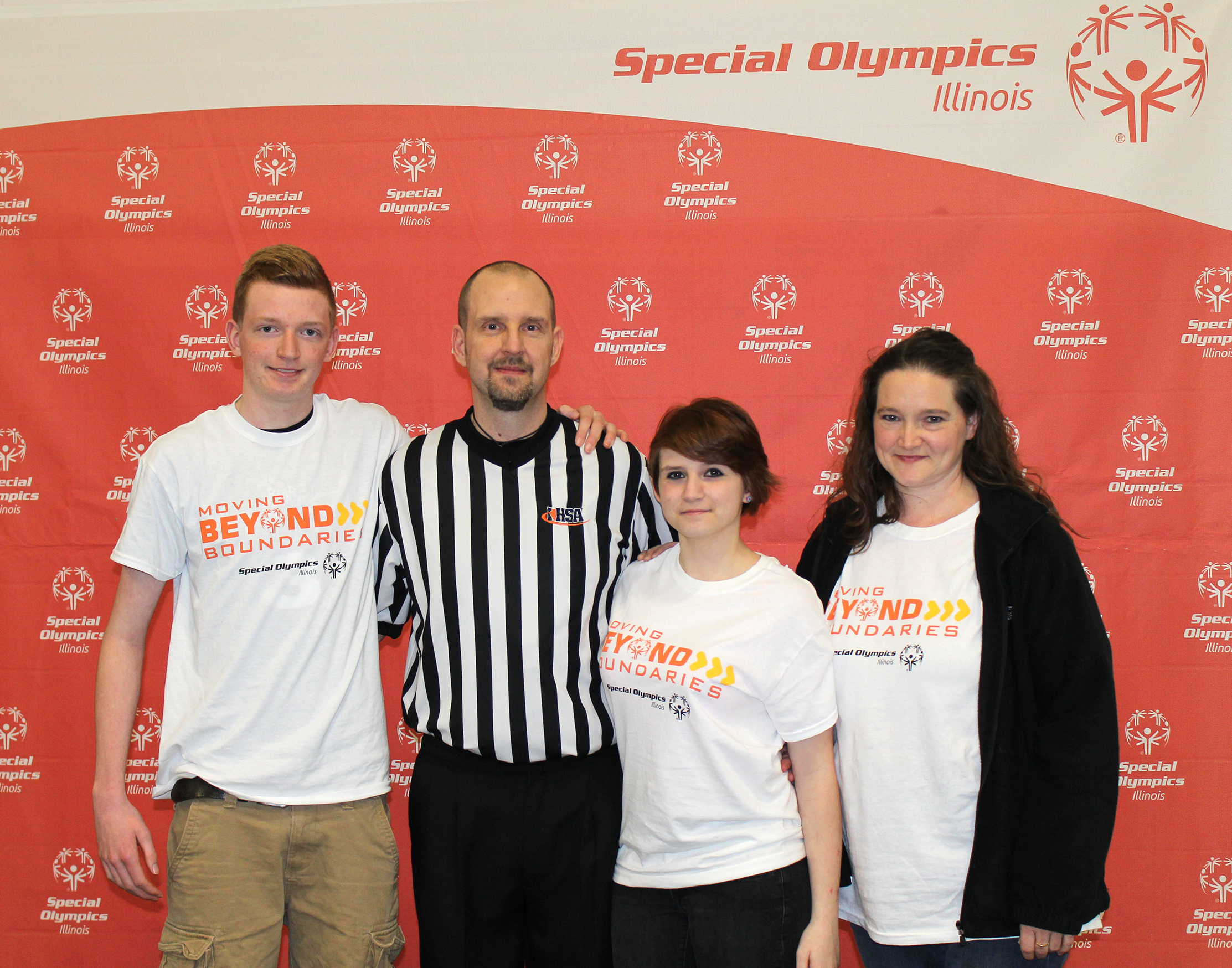 When basketball official Bob Henry of Plainfield arrived at the 2015 Special Olympics Illinois State Basketball Tournament in Bloomington-Normal on March 14, he brought more than his whistle and official’s jersey. His wife, Melanie, and children Brett and Amanda accompanied him to volunteer at the event.

Bob first officiated at the Special Olympics state tournament last year and “I thought this would be a fun thing to do as a family. I talked about my trip for several days after the event (last year), so when it was time to sign up this year, I asked who was interested in attending.”

While Bob was officiating six games during the day, his family members were working as timers and scorekeepers on the same court. For Melanie and Brett, it was their first time volunteering with Special Olympics. Amanda had volunteered at an event in Joliet last year.

“This was a great opportunity for my family and I to do something together,” said Melanie. “It was a lot of fun.”

She said the family went to dinner at a local restaurant after the games and saw a team from the tournament there. “An athlete recognized me and was so excited to see me. I told him that they played a great game and he gave me a huge smile and said ‘Thanks!’ That was very rewarding to me.”

Brett, 16, and a sophomore at Plainfield Central High School, said he’s up for a repeat next year. “Seeing the athletes so happy when some of them live with these disabilities is really something special,” he said. “I was happy to be a part of the athletes’ lives and to see them enjoy playing the game of basketball.”

Amanda, 14, and a freshman at Plainfield Central High School, agreed with her brother. “I’m planning on continuing with this amazing organization for more time to come,” she said. “I’m so excited to make so many more memories with all involved!”

For Bob, “smiles are the best part,” adding he likes watching people enjoy the game. “Officials, parents, participants and coaches all realize it’s about the activity, not the outcome.”

“This organization does wonders for people without realizing it. I love being able to interact with the athletes and watch how much fun they have,” said Amanda.

Bob recalled one of his favorite things – what he calls the unexpected high five. “It happened several times last year and twice this year,” he said. “As an official, many times your hand is either up in the air or out to your side indicating where the athlete should stand when in-bounding the ball. Nothing makes me smile more than when a player uses that opportunity to give me a high five.”

As an official, Bob said Special Olympics offers a different experience than a traditional high school or college game. “Last year, some Special Olympics athletes requested a photo with me and my partner after the game. It was really special to be part of something those athletes will keep forever. That is not always the reaction an official gets from a fan or a player.”

Volunteering together as a family “was a nice way for us to get away for the day and benefit others during the trip. This was their first time with Special Olympics and I do not think it will be their last,” said Bob.