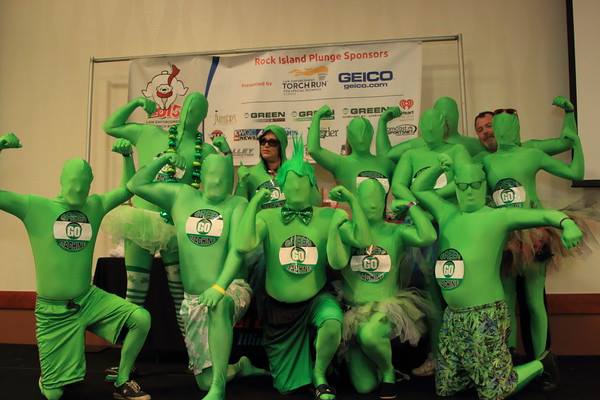 More than 40 employees from the three dealerships volunteered to take the chilly dip into Wicks Lake. These brave individuals were not content with just raising the minimum $75 required to plunge, however. A friendly competition between the locations as well as an individual prize saw several people break the $500 level and beyond. Chad Dressing, Dealer Principal, led the charge with $2,150, followed by Bev Carlile at $1,476.79, Shaun Sneath at $1,180 and Jarek Bakken at $525.

“We thank everyone out there who has donated to our cause,” said Dressing.

To help them reach their goal, the Green Family Hyundai store hosted a weekend yard sale, a fundraising night at Buffalo Wild Wings and held a raffle with more than 20 prizes and gift certificates. They won the Green competition by raising $5,826.79 and were the silver medal team at the Plunge.

The Green Chevrolet Chrysler (pictured at top of page) did an excellent job of getting all of their employees and customers involved by hosting a lunch fundraiser each Friday. They also collaborated with the Davenport store to host a raffle that featured gift certificates and prizes from area businesses. The East Moline location was the fourth place team at the Plunge ($4,837), just missing a plunger trophy by $208. The Davenport store was the 11th place team with a total of $1,735. With additional money from the Green Family Auto Group rolling in, their total is quickly approaching $16,000.

“We are very thankful to have had the Green Family Auto Group on board for the 2015 Plunge,” said Cathy Betar, SOILL Western/Area 4 Director. “Their momentum was contagious and encouraged other teams to raise more money as their online totals increased daily. There was quite a competition in the last two weeks as the teams competed for the coveted plunger trophies,” continued Betar. “Their enthusiasm at the event, shown off by their costumes, already has teams planning for next year’s costume contest.”

“Thanks to Jill Green, owner of the dealerships, who reached out not only to her own employees but also her contacts in the community to encourage participation as well” concluded Betar. Bush Construction ($3,030) and the East Moline Police Department ($750 and $1,000 sponsorship from the East Moline Police Benevolent) also participated in the Plunge at Jumer’s Casino and Hotel after a bit of prodding from Green.