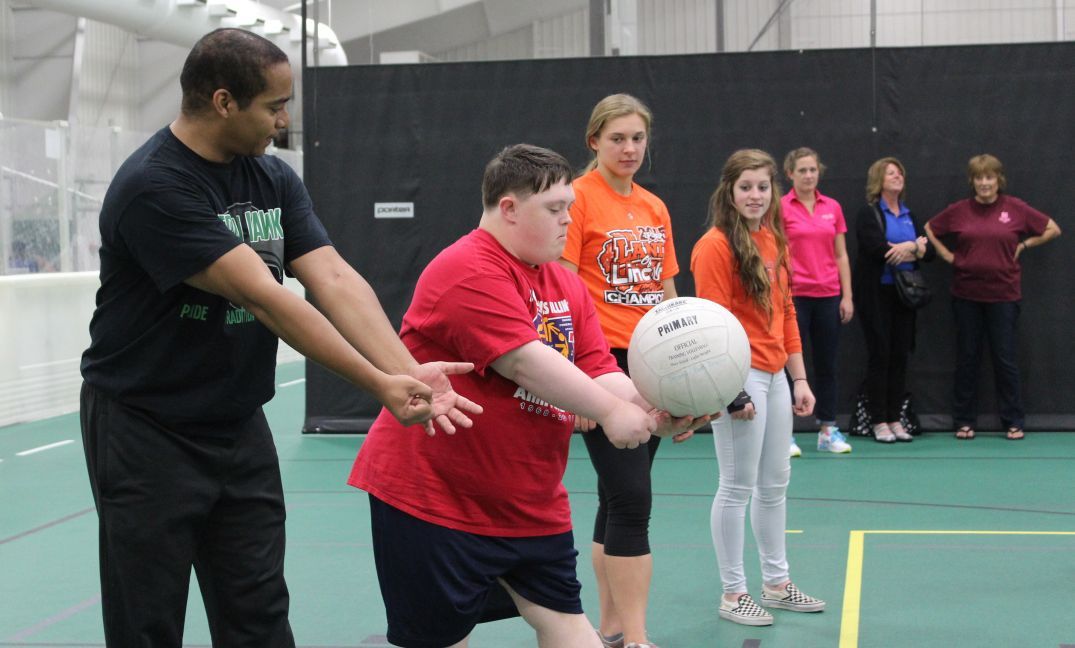 More than 15 girls from the high school’s volleyball team worked through drills with the athletes during their practice time Oct. 5 at the Decatur Indoor Sports Center. In addition to serves and scrimmages, the hour included plenty of high-fives and laughs.

“Like I tell them, things are bigger than wins and losses,” said Meridian coach Tony Holly, who initiated the group practice. “It’s neat to have something like this where it’s still volleyball, but it’s more than just ‘what’s your record gonna be?’ or ‘what’s going to happen in the postseason?’” The two teams, the Decatur Lions and Decatur Tigers, include a total of 13 athletes. They will travel to Rockford for the state competition on Oct. 24 and 25, a trip that also includes fun activities like a costume dance and dinner at a nice buffet, said Dana Floyd, Special Recreation Association supervisor for the district.

Most of the volleyball players have been participating for years. For instance, Shane Macken has been playing for eight years, and said the practices and games are a “great time here with my friends.”

Macken, 28, is looking forward to the state competition and plans to attend the dance as Batman.

His mother, Tressa Short, said he also participates in bowling and monthly dances that the park district holds at the Knights of Columbus Hall for people with disabilities.

He’s made a lot of friends, she said, and she never worries about his safety.

“They’re dependable. You’re not guessing whether the show’s gonna go on or not,” Short said. “The park district is a godsend, and they’ve been doing this for so long that everything is so well-organized.”

In addition, as a “Yellow Hat” park leader this summer, she helped serve lunch to participants in the park district’s Camp I Can.

“That was a nice one-on-one time with them,” she said. “I really enjoyed it.”

There wasn’t any skill in particular Chelsea was hoping to teach her fellow athletes. She was simply hoping they’d have fun and learn “just the love of the sport, really,” she said. The joint practice included work on serves and passing through a variety of drills that Holly said are familiar to his team. The girls and Special Olympics athletes seemed to blend seamlessly and even gathered in small groups to take pictures together afterward.

Holly said he wasn’t surprised that his team took so well to the joint activities.

“They love the sport, and they love helping people and being involved. I was smiling more watching their faces about how excited they were,” he said. “You tear up a little bit, because you see them getting all excited and the team here is excited. This is cool. This is how it should be.”

The Special Olympics volleyball team members do not pay to travel to the state competition, Floyd said, but they are raising money to help pay for the trip.

On Monday, their practice will include a Serve-a-Thon, where athletes take pledges for how many serves they can get out of 20. To donate, contact Floyd at (217) 429-7750.