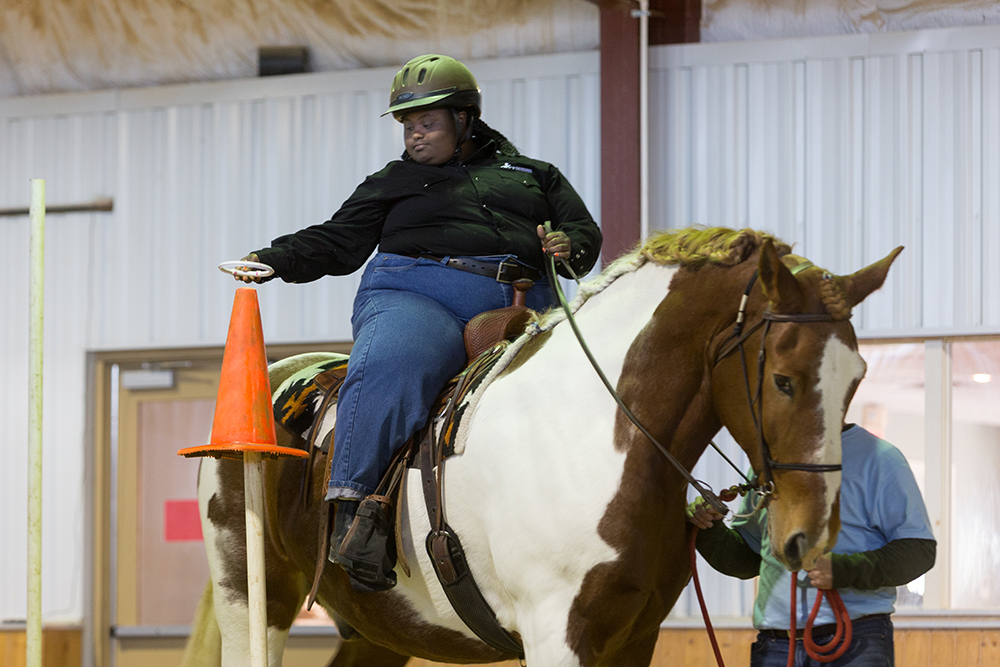 A record number of equestrian athletes – 146 – competed in five events at BraveHearts at the Bergmann Center as part of this year’s Fall Games. That number is up fivefold from a low of 28 athletes who competed in the sport in 1992.

Meggan Hill-McQueeney, President and COO of BraveHearts Therapeutic Riding & Educational Center, attributes the increase to better training of Special Olympics equestrian coaches and working to grow the sport so it’s safe, fun and a rewarding experience for the athletes. “Special Olympics is a perfect tie with PATH (Professional Association for Therapeutic Horsemanship) centers because it really gives those centers a place where their students can compete on an annual basis,” said Hill-McQueeney. “As the sport is proving itself as being a safe venue, and a fair and positive event, that’s just attracting more teams and agencies are bringing more athletes to compete in different events.”

Hill-McQueeney, who received the 2015 PATH International James Brady Professional Achievement Award, also believes that the annual equestrian competition at Fall Games gives athletes, coaches and all involved something to work toward each year. “When I think about Special Olympics, I always think about how many people there are behind the scenes supporting the horse – veterinarians, horseshoers, people giving them equine massages, nutritionists, dentists, people who braid their hair, groomers, exercisers, people who just keep them fit,” she said. “A day like Special Olympics is their peak day. A lot of people work with the horses to make sure that they’re going to do well come October for that special day for that athlete.” “The horse has something special to give to all of us, but especially to people with needs of many different types, whether it be physical or cognitive,” said Patrick “Paddy” McKevitt, who is Director of Operations for BraveHearts, a Special Olympics coach and 2015 PATH International Certified Professional of the Year Award recipient. “They really help people reach their true greatness. The added element of the horse and what it takes to achieve that skill set to go in the ring and compete with other athletes, it really is very empowering for anyone, especially someone who has a need or disability.”

A lot of the horses that come to Special Olympics are therapy horses.  According to Hill-McQueeney, only 1 percent of horses can meet the needs of becoming a therapy horse. “They need to be extremely tolerant of a rider’s needs and any adaptive equipment that’s used,” she said. “It takes a really, really special horse to hold it all together. These horses support the athletes emotionally – the horses really step up, just like a service dog would, that’s what a therapy horse does.” One special horse that competed at Fall Games was Mighty. He was one of four wild mustangs adopted from the Bureau of Land Management’s Eagle Nevada herd in 2013 by BraveHearts. All four mustangs were gentled by local military veterans at BraveHearts.

“Mighty probably came in as one of the wildest and now he’s the gentlest,” said Hill-McQueeny. “We did a lot of training with him; he’s extremely acclimated with sounds and toys. He is a very quiet and safe horse.” Two Special Olympics athletes rode Mighty at Fall Games and earned silver medals for their efforts.

“This is the first time we’ve ever had a mustang at Special Olympics, so we’re really proud of him,” said Hill-McQueeney. “There’s no harder job than being a therapy horse and to think that a mustang has been able to accomplish that is just really amazing to think of the possibilities. That’s what Special Olympics is about – people and opportunities – and we did that with a mustang.”

Another special horse at this year’s Fall Games was Huff (pictured at top of page). A half Percheron horse (draft horse), Huff was the biggest horse competing at equestrian. Because of his quiet and gentle demeanor, Huff was named PATH Horse of the Year for the Region 7 of PATH International.