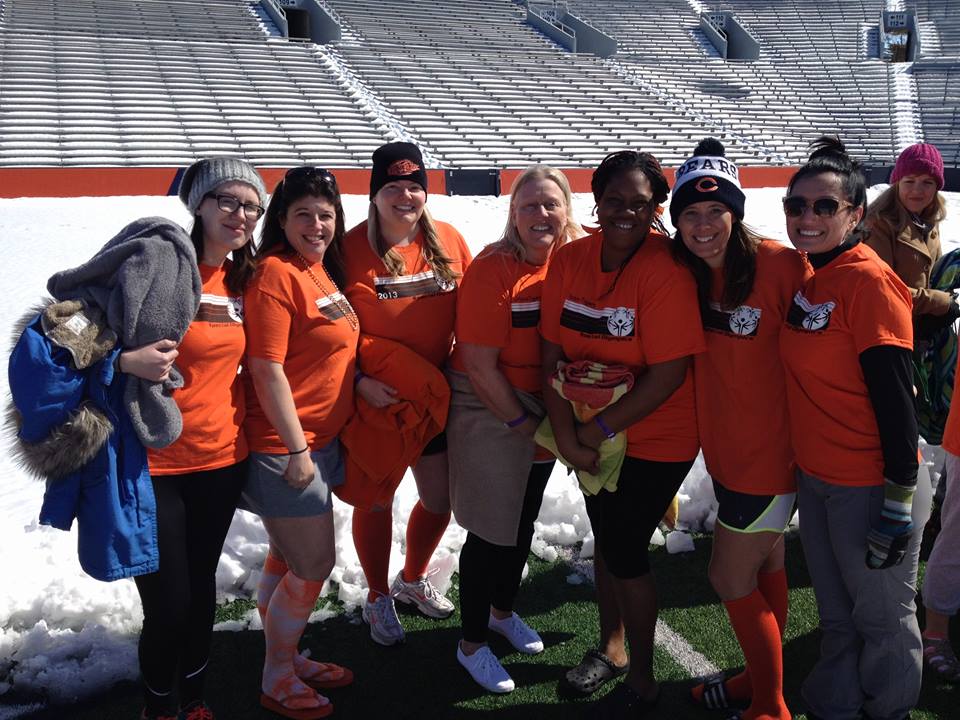 Lynnsey Brownfield, a seventh-grade special education teacher at Urbana Middle School, has been participating in the Mahomet Polar Plunge since 2013 and is looking forward to plunging again this year. Lynnsey Brownfield, far right, is shown with fellow teammates at her first Polar Plunge at Mahomet in 2013.

She had heard of the Polar Plunge before actually participating, but didn’t have the opportunity to take the plunge until 2013 and from then on, Brownfield’s been hooked!

“It’s my favorite time of the year,” she said. “I enjoy every part, from the fundraising to getting others involved to the hype and adrenaline waiting to plunge and even diving into that biting, cold water. The fact that the money is used for an organization I’m so passionate about is also awesome!” In 2015, the Urbana Middle School team raised $3,979, with Brownfield raising about $1,500 herself each year.

“The first two years, we only had teams of about five people,” Brownfield said. “The few of us who have done it consistently just talk about how much of a blast we have doing it each year and that slowly piques people’s interest, I think. Last year, we had a team of seven and I imagine it will continue to grow each year.”

The Polar Plunge “has evolved into a school-wide phenomenon that our entire building gets behind,” she said. Typically there are teams of teachers and students and the teams compete against each other to get the most money through building-wide fundraisers. Each team uses social media to spread the word about their fundraising efforts.

While the Urbana Middle School’s teams have never had special costumes for the plunge, Brownfield says “creativity often gives way to school spirit.” However, she holds out hope that one year they will come in costume. Brownfield has been working with people with disabilities for nearly 15 years. In college, she became involved with Special Olympics by attending events and supporting athletes she knew. She then began volunteering and has been coaching for the past several years.

She says it’s the athletes who keep her coming back year after year. “Anyone who has ever been involved in a Special Olympics event in any capacity knows how phenomenal these athletes are,” she said. “Jumping into a freezing lake or pool of water in the middle of winter is nothing compared to the training, dedication and heart these athletes have. If my being uncomfortable for five minutes in some small way helps these events continue at no cost to these participants and their families, it’s a no-brainer for me.”

What advice does Brownfield have for anyone thinking of taking the plunge for the first time? “Less is more when it comes to wardrobe,” she says. “Wearing something you can easily and quickly change out of is best, in my opinion. It’s all about keeping your feet warm. Make sure you have a dry pair of socks and some warm boots waiting for you!”

To people who are thinking about it , she says “DO IT! You’re really only cold for a couple of minutes … I promise!”

The team will be plunging again this year at noon Saturday, Feb. 27, at Lake of the Woods in Mahomet.

If you are interested in joining Urbana Middle School at the Mahomet Plunge or want to plunge at any of Illinois’ 21 locations, visit PlungeIllinois.com.