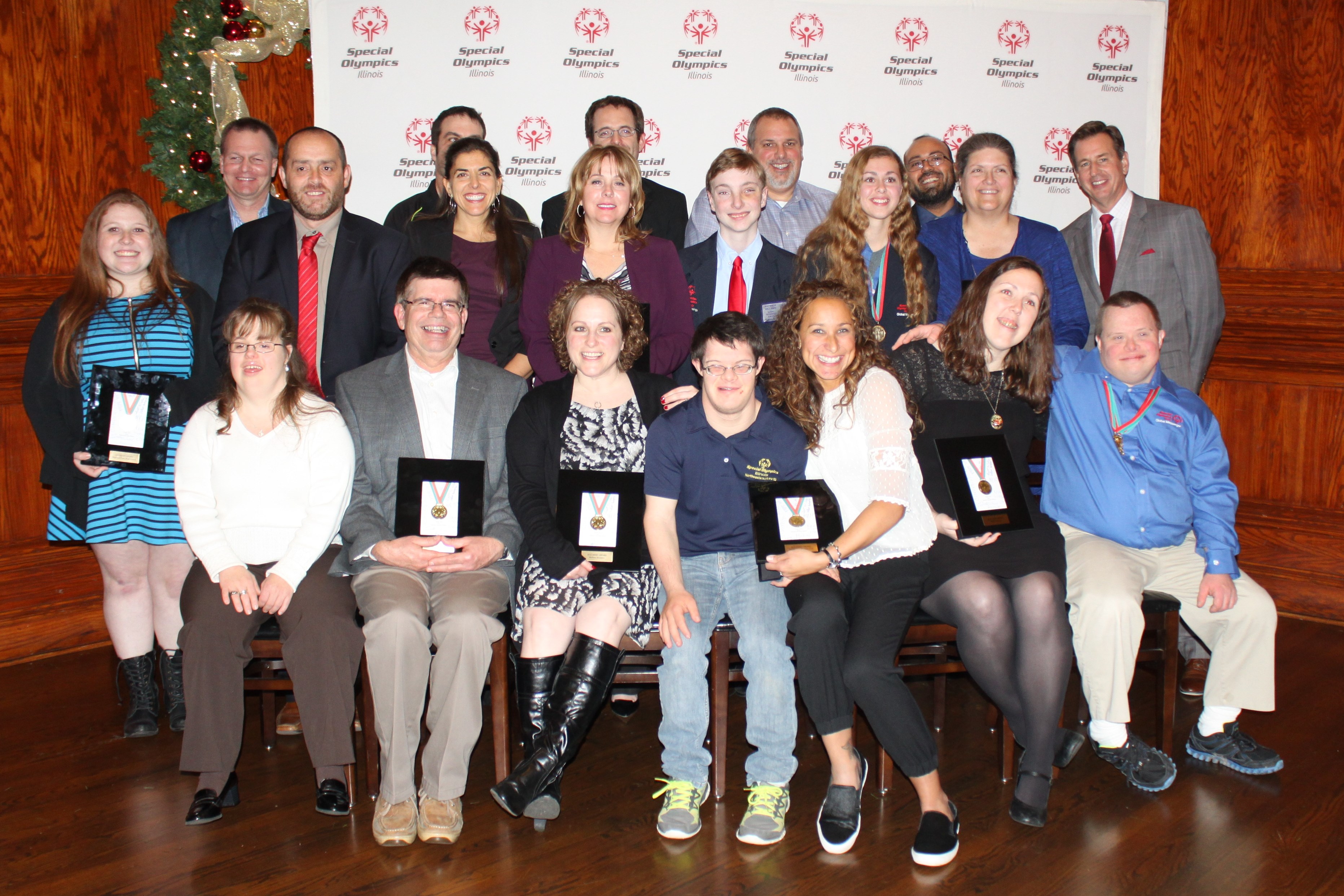 On Nov. 19, Maggiano’s hosted the 2015 Hero Awards Reception in Schaumburg. This event honors a select group from the Chicagoland area in grateful appreciation of their generous support throughout the year. Honorees and their families enjoyed cocktails and appetizers and mingled with Special Olympics Illinois athletes.

Special Olympics Illinois athlete and Global Messenger Bree Bogucki gave a heartfelt speech about the impact that competing in Special Olympics has brought not only to her life, but to lives of her fellow athletes and friends. For the past several years, Highland Park High School has been hosting the SOILL Northeastern/Area 13 Floor Hockey Skills event and Melissa Zientara is the front runner on all details including the facility set-up and recruiting Highland Park students to handle volunteer assignments. Her commitment to Special Olympics isn’t just limited to floor hockey.  Melissa has also recruited Highland Park students to help at the Basketball Tournament. She works diligently, independently and efficiently, but her greatest contribution is her attention to the Special Olympics athletes.  Her priority is for each athlete to be warmly welcomed, treated with respect and honored for their achievements. Highland Park has even started an independent agency with the leadership of student Robin Kass. Robin helps to assure the athletes are properly trained and have the full support of the school.

Ellen Noonan, a special education teacher, approached the staff at the SOILL South Cook-Will/Area 7 office with an idea for an event at her school that would raise awareness and funds for the Area athletes. This idea became known as the James Hart Jr. High Special Olympics Walk-a-Thon and has become a tradition that the seventh-grade class supports year after year.  She has spearheaded the event for the past 10 years, raising more than $45,000 and encouraging countless new students to volunteer in Area 7.

For the past 12 years, Todd Gardiner and the Illinois Gymnastics Institute Parents Booster Club have invited six Special Olympics Illinois gymnasts to perform at Navy Pier in front of Chicago Style audiences.  The opportunity is a thrill for the athletes and the audience alike.  This event also aids in spreading awareness to a large audience and embraces inclusion. Additionally, the conference donates all proceeds from a gift basket raffle to Special Olympics Illinois, raising more than $60,000 since the partnership began.

Dave Schultz, a United Airlines pilot, has volunteered at almost every event offered with Far West Suburban/Area 2 since 2007 including Motor Activities and Spring Games – he even braved the wind, cold and snow in Galena for Winter Games when extra volunteers were needed.

His commitment trickles into fundraising initiatives as well, and often involves his friends and family. Dave has earned the nickname “MacGiver” for his genuine interest and respect for the athletes’ abilities, as well as his desire to make each event the best it can be, for his endless energy, his generosity and his countless hours of help.

Kathy Thomas, the Special Recreation Coordinator for the Veteran’s Park District, has been active with Special Olympics for more than 20 years . Veteran’s Park District has generously hosted the Special Olympics Illinois District Bocce Tournament for more than 12 years.  Hundreds of athletes and their coaches, families, volunteers and supporters show up for an exciting day of bocce competition.  While this bocce event has grown and needs have changed, Kathy is always a step ahead of what needs to be done to make the event a success – from communication to venue set-up including equipment to signage. Kathy’s involvement reflects the spirit of acceptance, dignity and respect for all individuals with disabilities that Special Olympics promotes.

Jewel-Osco began a partnership with Special Olympics in 2014, when it introduced the Change for Champions at-register program that continued again in 2015. With the incredible support of Jewel-Osco and the generosity of their shoppers, more than $125,000 has been shared through Change for Champions. Jewel-Osco has been extremely generous with product donations utilized at state level competitions. The company also recognizes the value in hiring people with disabilities; Jewel-Osco employs 300 men and women with disabilities, offering full- and part-time employment and benefits including health insurance.

Special Olympics Illinois is grateful to these volunteers, business partners and individuals.  Their friendship has benefited literally thousands of children and adults and their families, and their contributions are invaluable throughout the year.