Special Olympics is Like Family to Knights of Columbus 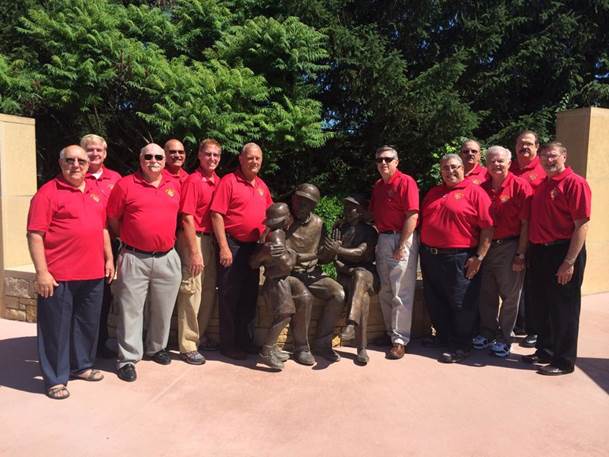 In just a few weeks, Knights of Columbus members from Illinois will join Special Olympics athletes from all corners of the state as they compete at SOILL Winter Games at Chestnut Mountain in Galena. It’s a relationship that has been going strong for nearly 50 years and one that will continue into the unforeseen future. Members of the Illinois Knights of Columbus presented Special Olympics Illinois a check for $100,000 at the 2015 Winter Games in Galena.

The Illinois Knights of Columbus support Special Olympics as a statewide Partner, Gold Medal Sponsor of both Winter and Summer Games, and, in 2015, marked their 10th year sponsoring Area Spring Games to the tune of $1 million over the decade.

Their commitment is not just financial – the Knights provide invaluable support to SOILL on a local, volunteer level. In essence, the Knights of Columbus and Special Olympics are family.

“We have been involved together for so long,” said Knights State Deputy Bill Doerfler. “The relationship between Special Olympics and the Knights is like one great big family.”

The best part of being involved with Special Olympics is “getting to spend time with the athletes and getting to know them,” said Doerfler. “They (athletes and families) have so much appreciation for what we do for them. It’s emotionally overwhelming.”

The 72,500 K of C members around the state appreciate that 90 percent of the money they raise through their Intellectual Disabilities Drive (or Tootsie Roll Drive) stays in their local communities. “That allows us to get to know the athletes and agencies in our area,” said Doerfler. At Winter Games, 10-15 Knights from local councils present awards to the athletes after competition, escort them during the Parade of Athletes through downtown Galena and make a check presentation at a reception after the Opening Ceremony.

“It’s such a thrill to spend the day with the athletes,” said Doerfler, adding his wife accompanies him to Winter and Summer Games. In fact, he’s even brought his 4-year-old grandson along to watch at Special Olympics competitions. “We start them young in the Knights,” he said with a chuckle.

Not only are the Knights making a difference in Illinois, they are working with Special Olympics on the national and global stage. Skip Kinyon, Immediate Past State Deputy, and SOILL President & CEO Dave Breen, are working with a Special Olympics United States Leadership Council committee to foster more recognition for and engagement with the Knights nationally; the Knights of Columbus Supreme Council will host the first Special Olympics football (soccer) tournament during  European football week in Rome, Italy, May 20-22; and Deputy Supreme Knight Logan Ludwig (former Illinois State Deputy),  led a delegation of K of C representatives and volunteers to the 2015 Special Olympics World Games, beginning with the Opening Ceremony at the Los Angeles Memorial Coliseum. In fact, the Knights covered the costs of every athlete from the United States and Canada – more than 400 total – who participated in the World Games.  Read more about Knights involvement at World Games.