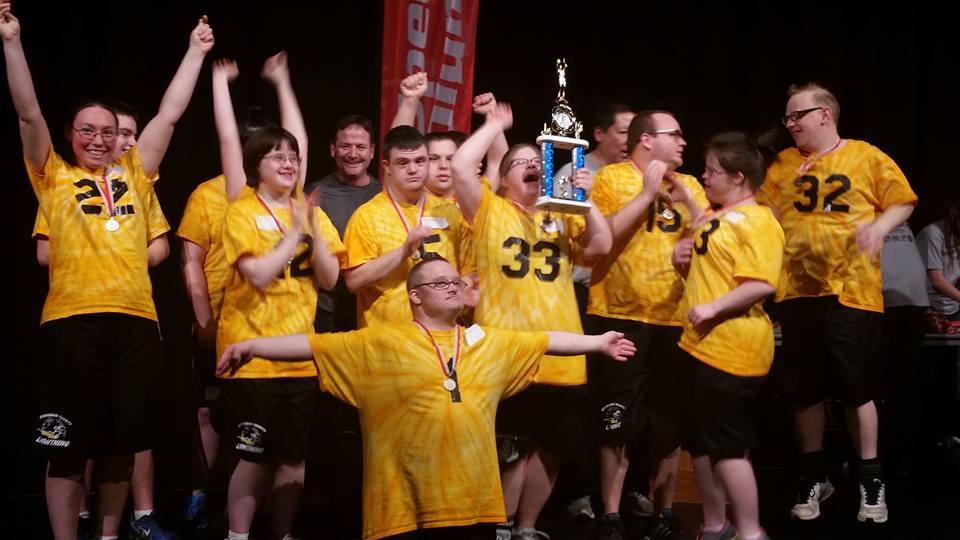 When current head coach Diana Ludwig and Sue Zakutansky became involved as coaches for the team, they took a second look at basketball as a team sport. “I was most interested in the idea of playing on a team where they would have to rely on each other to play the game,” said Zakutansky, head basketball coach for team and skills. 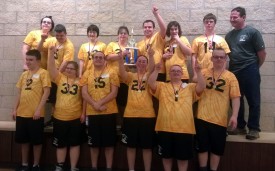 According to Zakutansky, of the eleven athletes on the team that participated in basketball skills that first year, nine of them went on to compete at the state level. Thus, the Lightning decided to start a new basketball team that next year, and athletes had the option to choose to participate in the team basketball sport or individual skills competition. Each year since that time, the Effingham County Lightning has offered both options for their athletes.

In 2015, the Effingham County Lightning was fortunate to have enough players for two basketball teams and a skills team, yet both teams struggled to win games at the district competition. “It took us two years to even win a game and three years to win a game at district,” said Zakutansky. But this year, the team had fire! At the District H Basketball Tournament on Jan. 31 in Trenton, the Effingham County Lightning team won both of its games and earned the title of Senior Division I District Champions.

While the athletes were excited and reported some feelings of nervousness, most were prepared and ready to win.  Angie Haarmann, ECL athlete, wondered “if we win at district do we get a parade in town?”  Zakutansky had a quick reply “if we win gold at State, then I could promise a big cake and that I would work on the parade.” Now that the team is state-bound, scheduled to play two games March 13 at Horton Fieldhouse at Illinois State University, they definitely deserve the cake, and may earn that parade.

It was not just one player of the ECL team who carried the team or was most improved, but rather the team as a whole was most improved. “The athletes really jelled this year,” said Zakutansky. “They play the game well together – more passing, more talking to each other, less blaming. More fun!”

The Effingham County Lightning team truly deserves their District championship win, and one thing is for sure, their community of Effingham is very proud.  Effingham is a basketball community and many of the teams’ players have brothers and sisters, cousins, friends and neighbors who play basketball. The wins and losses of community teams are frequently broadcasted, televised and reported in news outlets. Now, the Effingham County Lightning is a part of that conversation and the athletes could not feel more proud and honored to be recognized for their amazing achievements this year. All told, including the two district game wins, the team’s record was 7 wins – 4 losses.

Adam Gharst will compete with Effingham County Lightning in individual basketball skills for the first time at the State Basketball Tournament. Abby Koester also received a gold medal at the East Central/Area 9 basketball individual skills competition, qualifying for the state competition, but will not attend because of family obligations. ECL has had other individual skills athletes compete at State Basketball in past years, including Karissa Bean and Macey Williamson.

Update: The Effingham County Lightning won the gold medal at 2016 SOILL State Basketball Tournament and received a parade upon returning to Effingham.