Join Special Olympics Illinois Far West Suburban/Area 2 for the 7th Annual “You Raise Me Up” benefit concert at 3 p.m. Saturday, April 9, at College Church in Wheaton.  This year’s concert will feature the talents of The STARS of College Church, Clear Confusion, Late Night Blues, BEYOND GLEE and The Village Vocal Chords. Additionally, local Special Olympics athletes will share their personal experiences.

The STARS of College Church have performed in every “You Raise Me Up” concert. This ministry group of performers is made up of adult individuals with intellectual and developmental disabilities, and they are called STARS (Seeking to Always Reflect the Savior) because they shine for Jesus. 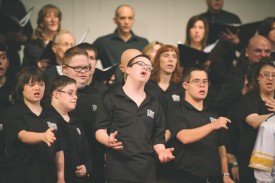 Clear Confusion, winner of the 2015 Illinois State Battle of the Bands, has taken the experience of being exposed to classic rock, alternative, pop, blues, acoustic and punk and have mixed it all together to form their unique blend of original music. The band describes themselves as an “original band that also plays cover songs as opposed to a cover band that also plays original songs.” Clear Confusion recently played The Tivoli Theatre in Downers Grove and performs regularly at Mullen’s in Lisle at Tuesday Night Open Mic (hosted by Geoff Matson), Ballydoyle in Downers Grove, the Moose Lodge, and other locations in DuPage County. They also play various block parties and festivals in the Chicago suburbs.

BEYOND GLEE is a performance based, mixed adult community chorus that sings a wide repertoire of songs. Founded in September 2012 and under the direction of Paul Sirvatka, BEYOND GLEE has gained the reputation as being one of the premier choral groups in the Chicagoland area.  BEYOND GLEE is sponsored by the Wheaton Park District, and has performed at every “You Raise Me Up” concert since 2013.

Elmhurst College’s vocal jazz ensemble Late Night Blues is an internationally acclaimed group that performs a variety of styles of music including jazz, funk, swing and pop. The students’ non-stop energy, talent and professional standards have brought the group elite status as one of the most exciting collegiate vocal jazz ensembles in the United States. Late Night Blues has won numerous honors and awards at the Collegiate Showcase Festival in Chicago. In addition to giving concerts frequently in the Chicago area, the group has been invited to perform at the International Association of Jazz Educators Convention, the Illinois Music Educators Association All-State Music Conference, and John Jacobson’s “America Sings” Festival.

The Village Vocal Chords is the current, and 20-time international championship chorus of Harmony, Incorporated, an international organization of women who sing a cappella, four-part harmony in the barbershop style.  Since 1961, the group has been wowing audiences with their beautiful blend of voices and their “ringing chords.”

Tickets are $10 each (5 for $40), and are available here. 100 percent of ticket revenue will benefit Special Olympics Illinois Far West Suburban/Area 2 serving athletes with intellectual disabilities in the suburbs in west DuPage, Kane and Kendall County.