Volunteering at Special Olympics a Tradition for Schwantz Family 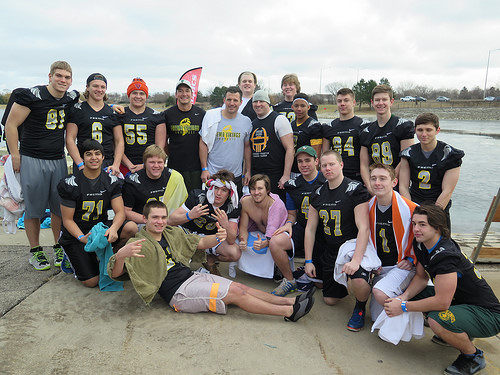 It takes a village to prepare for a Special Olympics Illinois competition and the North Suburban Cook/Area 18 Spring Games were no exception. Amongst these volunteers were Austin Schwantz, a junior at Fremd High School, who recruited his fellow football teammates to help with set-up and tear down of Area 18 Spring Games at Prospect High School in Mt. Prospect.

Austin is no stranger to volunteering. He helps coach the Blue Jays Special Olympics basketball team with some of his teammates who have siblings with special needs.

This winter he looked to expand his efforts. He wanted to further give back in a way that could also bond his team so he registered for the 2016 Palatine Polar Plunge. While they were reluctant at first, the football coaches helped to empower the team stating that if the team plunged, they would plunge, too. The Fremd Football went on to raise $3,000.

“The kids and coaches had such a great time, the coach is looking to making this a team event every year,” Austin’s mom, Brenda Schwantz, said. “It was all any of them could talk about for the next day.” 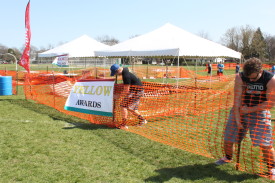 Volunteering is something Austin may have learned from his parents, Brenda and Jim Schwantz. Jim, a former NFL football player and current Mayor of Palatine, and Brenda have been involved in Special Olympics Illinois since his days with the Bears.

“When he went to training camp in Plattville, the general manager at Eagle Ridge, would let the families stay there and he asked in return that we volunteer at the Winter Games,” Brenda explained.

“Eagle Ridge use to host the [Victory] Dance there, so Jim and I came home from our honeymoon and went straight to the Opening Ceremony.”

“We did it for a few years and were hooked,” says Brenda. “We made it a point to be around for the Winter Games and Summer Games.”

Jim has participated in the Torch Run Brenda even remembers volunteering in the 90-degree heat at Summer Games seven and a half months pregnant.

Their involvement paused when they moved to Dallas, but they picked back up when they returned to Chicago.

Mayor Schwantz started on the Special Leisure Services Foundation Board and served for over 10 years. He has also awarded Special Olympics Illinois teams and athletes with impressive achievements with proclamations.

Special Olympics Illinois is so grateful for support from the Schwantz Family, and all those throughout the state who make giving back a family affair.