The format for this year’s event will match professional athletes, and other celebrities with amateur foursomes in a scramble format tournament. Some of the celebrities expected to attend are Eric Soderholm, Cliff Levingston, Ronnie Bull, Ike Hill, Bob Parsons, Paul Popovich and Jim Thornton.

Registration begins at 9 a.m., with a shotgun start at 10:30 a.m. There will be cocktails and a dinner/auction after the day’s golfing.

This event offers attendees the opportunity to join the network of corporations and individuals who contribute to the success of thousands of Special Olympics athletes in the Chicagoland area. Please join us this year as a sponsor or individual golfer, or if you can’t attend, consider making a financial contribution. 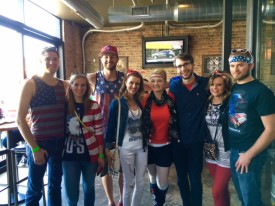 More than 175 people showed up on Saturday, April 23, for the 11th Annual Young Professionals Board Pub Crawl. Pub Crawl guests visited seven pubs in the Wicker Park neighborhood of Chicago and enjoyed drink and food specials throughout the day. Warm weather contributed to a fun afternoon enjoyed in a historic part of Chicago. The event concluded with food donated by Chipotle and a fun raffle.

Event co-chairs Kaitlyn Rosen and Mae Rodovitch and their planning committee arranged a fabulous raffle featuring tickets to comedy clubs, bowling parties, gift cards to spas and salons as well as gift cards to more than a dozen Chicago restaurants. Several guests were awarded best costume as part of the Team America theme and received restaurant gift cards in recognition. The event raised more than $4,600 to support athletes who participate in the Chicago/Area 3 program.

Coach of the Year Awarded at Spring Games

For the first time, Special Olympics Illinois Eastern Central/Area 9 recognized a coach with an award which recognizing the coach’s outstanding leadership abilities, volunteerism and dedication to Special Olympics sports programs at Spring Games.

The Area 9 Coach of the Year award was presented to Terry Prasun, head Special Olympics coach of the Windsor Schools team.

“The decision as to which of the 82 head coaches in the Area should win the inaugural Coach of the Year award was not an easy decision by any means,” said Vanessa Duncan, Area Director. “This decision was most difficult because of the many superstar coaches that lead, train, and love our Special Olympics Area 9 athletes.”

Prasun is an admired coach who trains her athletes in four sports throughout the year, including athletics (track & field), bocce, basketball and bowling. Read More

Brooklyn competed in the 100-meter race and the softball throw event at the 2016 East Central/Area 9 Spring Games at Eastern Illinois University, earning a medal in both of events.  But not only is Brooklyn an amazing athlete, she is also a fierce fundraiser for Area 9.

During the past two years, Brooklyn, her parents and family members have hosted fundraisers to provide financial support so that Area 9 can continue to offer free sports training and competitions, as well as add competition and family events. Last year, Brooklyn’s family was able to donate $871 from various fundraising efforts.

This year, they almost doubled their donation to East Central/Area 9 with a total of $1,570. Read More

Volunteering at Special Olympics a Tradition for Schwantz Family

Austin is no stranger to volunteering. He helps coach the Blue Jays Special Olympics basketball team with some of his teammates who have siblings with special needs.

This winter he looked to expand his efforts. He wanted to further give back in a way that could also bond his team so he registered for the 2016 Palatine Polar Plunge. While they were reluctant at first, the football coaches helped to empower the team stating that if the team plunged, they would plunge, too. The Fremd Football went on to raise $3,000.

“The kids and coaches had such a great time, the coach is looking to making this a team event every year,” Austin’s mom, Brenda Schwantz, said. “It was all any of them could talk about for the next day.”

Volunteering is something Austin may have learned from his parents, Brenda and Jim Schwantz. Read More

On April 23, Palatine High School hosted Distance Night in Palatine – an event deigned to bring the best high school runners together from throughout Illinois and the Midwest while raising money for charity. 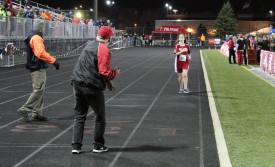 Distance Night in Palatine is a unique fusion of elite distance racing, music and fun. Races included the 800-, 1,600- and 3,200-meter distances as well as an 800-meter race for Special Olympics Illinois athletes.

“This race allows us to celebrate the true meaning of competition – to run to the best of your ability,” said Chris Quick, Palatine High School English teacher.

Quick was inspired by his brother, Chad, who competed in wheelchair races and more through Special Olympics during his childhood.

“It is because of him that I chose to make Special Olympics the primary beneficiary of our event,” Quick explains. “Our goal is to bring both financial support and awareness to Special Olympics.”

The Special Olympics 800 took place right before the “Main Event” races later in the evening and the participating athletes received a warm introduction prior to running.

This year’s event raised $1,870 for the athletes of Special Olympics Illinois. Thank you to Palatine High School and all of those who participated in Distance Night for their support! Watch video of event.