Sixteen teams competed, each with 8 members playing tug-of-war against the SIU School of Aviation’s 737 weighing more than 60,000 pounds. More than $25,600 was raised for the athletes of Special Olympics Illinois. Awards were given to the fastest pull in each division, fastest pull overall, top fundraising team and team spirit. 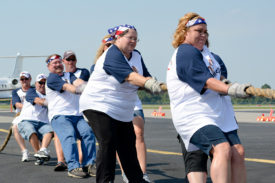 One of the participating teams was The Wright Stuff of Mascoutah. Affiliated with Scott Air Force Base, the team was led by Alice Howe and consisted of 8 military veterans and friends. The members were Alice Howe, Brenda Reed, Blair Reed, Ada Sinclair, Steve Eller, Cathy Stubbs, Mark Baker and Lindy Baker.

The Wright Stuff has a long history with Special Olympics Illinois. Alice Howe grew up in a family where sports played a big role. “When my son was diagnosed (with autism), I thought sports in the future was lost, but it just went in another direction,” said Howe. “When I found Special Olympics, I had to become a coach and learn to teach others like my son how much fun sports can be in your life.”

Teams were split into three divisions – Public Safety (for law enforcement, corrections and fire departments), Open (for general public) and SIU (for teams affiliated with the university). The Wright Stuff, participating in the Open Division, pulled the 60,000-pound plane 12 feet down the runway in 11.28 seconds.

“We just wanted to move the plane an inch,” Howe said. Not only did they do that, they pulled so quickly, they earned second place in the Open Division.

“This was such an awesome experience to help the athletes.”