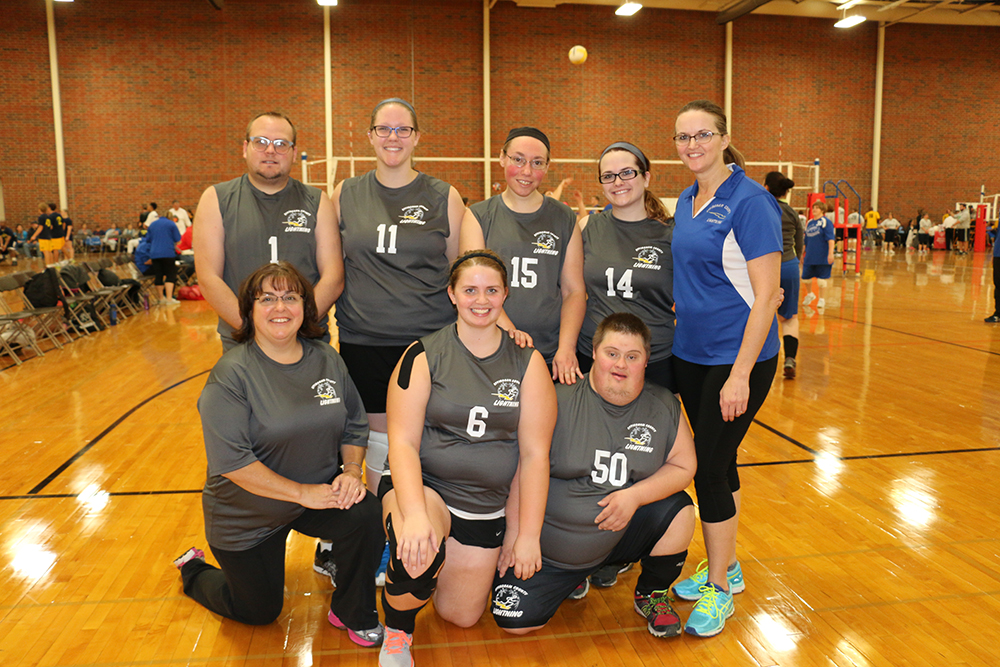 The Effingham County Lightning brought its first Unified Sports team to the Fall Games in Rockford on Oct. 22-23, competing in volleyball at the state level. The team of three Special Olympics athletes and three peers from the community is a close-knit, family-like group.

The team is comprised of Special Olympics athletes Kraig Dahnke #1, Shane Soltwedel #50 and Rachel Zakutansky #15; partners Allison Deters #11, Lacy Ludwig #14 and Jennifer Soltwedel #6; and coaches Lori Ludwig and Sue Zakutansky. Athlete Tom Frichtl played on the team throughout the season, but was unable to travel to Fall Games because of family reasons. 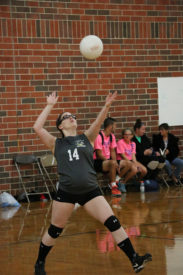 Many involved with the Effingham County Lightning team are actually family members. The coaches are sisters-in-law, making their daughters Lacy and Rachel cousins, while Shane and Jennifer are siblings.

“This is a parent-run team,” said Sue Zakutansky. The agency offers competition in basketball, athletics, bowling and volleyball. “Parents, siblings and friends all volunteer their time to keep the team going.”

When asked by SOILL Eastern Central/Area 9 Director Vanessa Duncan if they could field a Unified team to compete at a Volleyball Qualifier, Lori and Sue quickly put the team together. Both Lacy and Jennifer had played recreational volleyball when they were in high school and Allison works with Sue at the local IGA.

The team had no illusions of advancing from the qualifier, but they received bronze medals there and were invited to compete at the Fall Games. “This was such a surprise for us,” said Sue. “We’re competing at state!”

“It’s just incredible that we made it to state in our first year,” said Allison.

All of the athletes and partners on the team have become good friends through Special Olympics. Lacy has been helping with the team since she was a young child – in addition to her mom coaching, her dad also coaches basketball. Allison heard about how much fun the team was having through her job and wanted to get involved too. 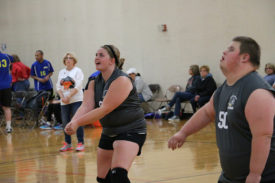 Jennifer Soltwedel, 20, has been by her brother Shane’s side since he joined the Effingham County Lightning team when he was 12. “She’s at every event, always volunteering, and drives him everywhere,” said Lori Ludwig. “She is a part of the team,” which makes it even sweeter that she can play Unified with Shane, now 26.

What makes Unified Sports so special? “I just like being on the floor with him,” says Jennifer. “I feel like I’m part of the team – in the spotlight with him. That’s the greatest reward.”

“Ever since I was little, my friends have gained experience with my brother,” said Jennifer. “Once you get to know them (people with disabilities) as people, it’s like a whole new life perspective. It shows you life’s worth it, no matter how you live it.”

The team finished the state tournament in fourth place, all agreed it was a great experience that was much bigger than the final placement. “We’re hoping to get more Unified partners involved in the future,” said Lori Ludwig.