Special Olympics Illinois athlete Jacob Cross of Bloomington is looking forward to repeating the Polar Plunge at Bloomington’s Miller Park on Feb. 25, 2017. Jacob has come up with a rather unique way of raising the minimum $100 to participate in the event that helps both Special Olympics and the environment. 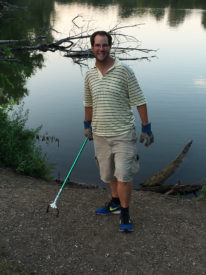 Jacob plunged in 2016 with his Special Olympics team from Tri-Valley High School (he’s pictured above in back row wearing a blue wig). Afterward, he told his mother, Julie, he wanted to do it again in 2017. She told him “If you want to this again, let’s try to raise $100 by recycling cans. Why not see how much we can collect?”

Jacob was all in. He already had experience collecting aluminum cans; he had collected cans as a cool-down in the local parks after track practices.

He started with purpose over the summer and ramped up his efforts this fall. He visits local public parks to collect the cans and takes them to a local recycling plant to exchange for cash. “Right now, aluminum cans are getting 30 to 35 cents per pound,” said Julie Cross.

As Jacob’s friends and family have heard of his fundraising efforts, they have been collecting cans and recyclables for him. “We even had someone give us tires so we can recycle the rims,” said Julie. “Now we just have to figure out how to get the tires off the rims,” she said with a chuckle. 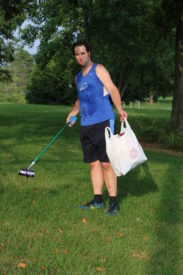 Jacob, 26, has been a Special Olympics athlete since he was about 10 years old. He has concentrated on swimming through the years, deviating to athletics (track & field) for two years. He started swimming with Special Opportunities Available in Recreation (SOAR) as a boy, swam with Bloomington Parks & Recreations summer team and then swam on the boys’ swim team at Bloomington High School. He now swims with the Tri-Valley team because their practice times fit best into the family’s schedule, his mother said.

Register for the 2017 Polar Plunge at any of the 22 locations and give athletes like Jacob the opportunity to transform their lives through Special Olympics.