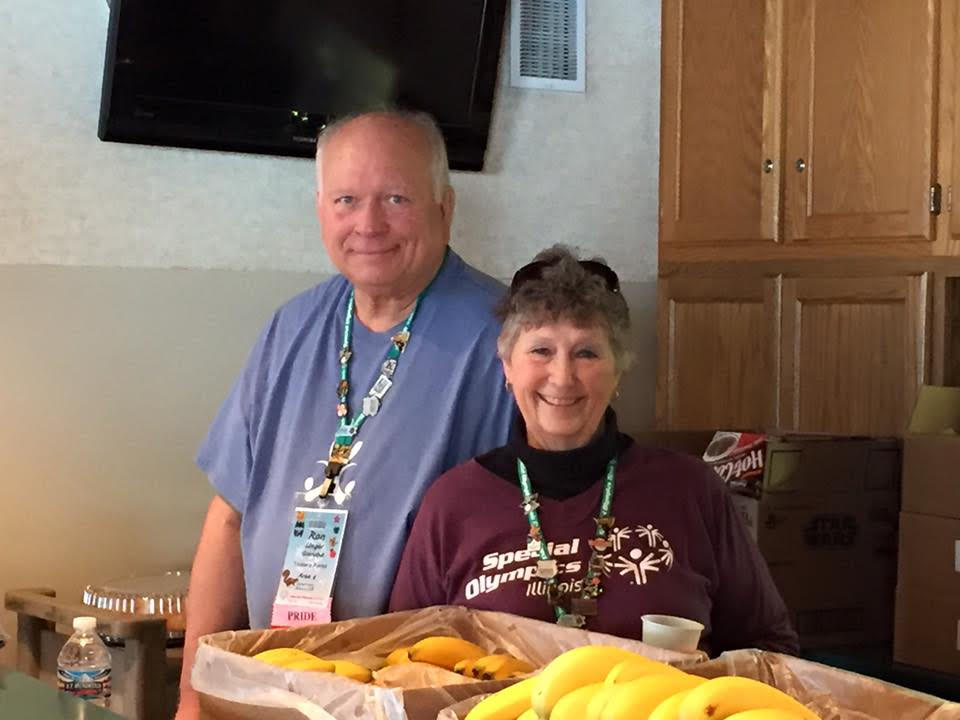 Every year Special Olympics Illinois relies on the generosity of tens of thousands of volunteers to put on nearly 300 events and competitions. These helpers, comprised of family members, friends, students, corporate sponsors and community members, are key to both local and statewide initiatives.

Many volunteers return to the same events annually and become a part of tradition. The athletes smile at familiar faces, and create bonds with those helping to ensure their success.

Leah and Ron Unger have been involved with Special Olympics for over six years. It was their granddaughter, Tamara, who got them involved.

“We attended a few functions and loved being with her new friends,” Leah explains. “Over time we felt this was something we needed to be involved in at the local level.”

Since getting involved in Western/Area 4, the pair has volunteered at the local, district and state level including the Galesburg, Macomb and Rock Island Polar Plunges, bowling, basketball and aquatics competitions, and more. In fact, Leah and Ron have become known as Grandma and Grandpa to the 90 athletes competing in their local agency.

This is the third year they will volunteer at hospitality, where among many other things they serve up hot chocolate.

In 2014, Tamara represented Illinois by going to New Jersey for the USA Games in aquatics where she earned two gold, one silver and one bronze medal.

Their first year volunteering at Winter Games, Leah recalls they came to support to athletes from their area who generally did not have anyone to cheer for them. The Ungers arrived early in downtown Galena for the Opening Ceremony. She and Ron were greeted by several athletes who were thrilled to show off the shops and sights in the area. The group quickly bonded.

“Ron particular connected with each of the male athletes and to this day they seek him out to share stories about what is going on in their lives.”

Another annual Winter Games volunteer is Dave Schultz who has been involved in Special Olympics for over ten years.

“I’m always impressed by the skill and sportsmanship of the athletes,” Dave explains.” No matter what the competition, they always try their best and help each other out.

You can find Dave on the mountain early to help set up both the sprint and distance courses, and during competitions he keeps busy assisting athletes to and from various venues. He also provides encouragement to the athletes during the distance events.

Dave says he has so many fond memories of Winter Games that it’s hard to single one out, however, at the Opening Ceremony a few years prior he described seeing the parade and torch coming through downtown as “magical.”

“As always, I am looking forward to Winter Games this year. No matter what event I volunteer at I always get way more out of it than what effort I put in!

Maureen Hunt has been volunteering with Special Olympics for five years this spring. She has a year-round presence, helping out at everything from tennis and golf to floor hockey and basketball, though she admits Spring Games are her favorite.

At Winter Games, Maureen volunteers with cross country skiing and snowshoeing and her roles have included timing, escorting athletes, cheering out on the course and more.

“At my very first event an athlete came up to me and asked if I would be his best friend for life,” Maureen explains.

“I, of course, said I would love to be his best friend for life. Ever since that day, when he sees me at an event, he gives me a big hug and a smile. Makes my day.”

Special Olympics Illinois thanks all of the Winter Games volunteers – and all of those who have, or will, volunteer throughout the year.