Evanston resident Caroline Colianne has a love for sports that began when she joined the track team. After that, she started playing all of the sports that she could until finally learning about Special Olympics. Since her introduction to the organization, she has become a Global Messenger and an athlete in swimming, track, basketball, and powerlifting.

Before joining Special Olympics, Colianne had never learned to swim. Her career on the aquatics team began in 2006 and since then she has become a fantastic swimmer. She works at a children’s center in Evanston as a swim assistant and swimming instructor, and even went to the Special Olympics USA Games for swimming in 2014.

Along with swimming, Colianne has been playing basketball under her coach Leonard Woodson with Evanston Special Recreation for Special Olympics Illinois since 2006. When asked what got her into basketball, Colianne responded, “I just liked watching the game and thought it would be fun to play!” 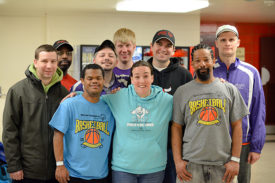 Although the team started out as an even split co-ed team, she is now the only female athlete on a seven-person team. Defense is her strength but she plays as a guard as well. According to Colianne, “Playing with all guys is ok, but I do feel intimidated at times. When that happens, I just take a second and tell myself, ‘No, I can be as good as them!’ and then I push forward.”

The basketball court isn’t the only place where Caroline feels outnumbered as she is also involved in power-lifting. Her personal best is a 205 pound deadlift and she feels that the strength training helps with her basketball skills.

As a Global Messenger for the Special Olympics, Colianne has given two speeches. One of her speeches served as the kick-off for the Illinois Lottery Game at Soldier Field and the other was at school for a group of 3rd graders. She said that being an athlete has given her a lot more confidence and plays a large part in her being able to speak in public.

Colianne has become a large contender in the games and even though she plays traditionally male-dominated sports, she doesn’t let that stop her. If you look up “girl power” in the dictionary, you may find the name Caroline Colianne next to it.