Special Olympics Illinois hosted 19 Spring Games throughout the state and these events saw almost 10,000 athletes competing over a 3-week span. Volunteers are integral to the success of these Games. 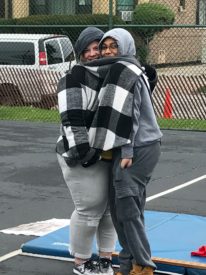 The Special Olympics Illinois Area 3/Chicago Spring Games were held at Eckersall Stadium in Chicago and Ray Baker brought a unique volunteer group to help with the Games.

Baker, who currently serves as a Transition Specialist with the Bridge Program, helps support District 86 students with their transition goals as they move on to their local community college. He gathered a group of twelve students — adults with intellectual disabilities — to support their peers.

“Our class has done some team building and volunteer work earlier in the year and we were brainstorming another project to do,” Baker explains.

“My students know my background and were excited about the idea of volunteering at Special Olympics.”

The group had no idea what their role would be, but “they were just excited to be there on Thursday.” Baker’s enthusiasm about Spring Games, having previously been there as a coach, was contagious and the volunteer group was excited to experience it themselves. 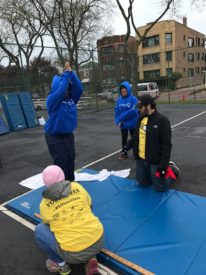 “I have a couple students who have volunteered with Special Olympics in the past and were really excited about the idea of doing it again.”

Despite the weather – a chilly and damp Spring Day – the volunteer group worked hard and contributed to the great day of competition.

His motivation was to help promote the mission of Special Olympics as well as to inspire his students to get involved in their community.

“I hoped that my students would gain better understanding of what opportunities Special Olympics creates and are empowered to become more involved with the organization and support it both locally and at the state wide level.”

After a successful first year, Baker is hopeful this will become an annual occurrence.

“I imagine we will have a much larger group to volunteer next year.”