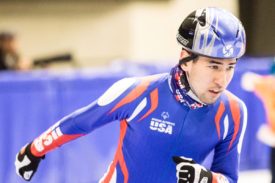 This past March, Tommy was one of six Special Olympics Illinois Athletes to qualify and compete in the Special Olympics World Games, which took place in Schladming, Austria. Tommy stole the show by winning not one, but two medals in speed-skating. He took home gold in the 500-meter race and the bronze in the 777-meter race. Yet another milestone was reached this past July. Shimoda was one of 25 Special Olympics athletes that were honored at the 25th Annual ESPYs. Tommy became the only Special Olympics Athlete from Illinois to receive an honorary ESPY.

The accomplishments just keep getting better for this outstanding Special Olympics Illinois athlete. On Monday, October 2, Tommy will be the first Special Olympics Athlete inducted into the Chicagoland Sports Hall of Fame. A ceremony will be held at the Wintrust Arena to honor Tommy, along with other distinguished athletes and sports 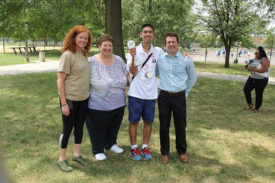 enthusiasts such as Tom Ricketts, Jonathan Toews, Kerry Wood, and Hawk Harrelson. Tommy is honored to be inducted into the same class as some of his favorite athletes and sports role models.

Over the years, sports have been an extremely important aspect of Tommy’s life. Sports and competition allowed Tommy to thrive on and off the playing field. His endless energy is contagious and allows him to be the best teammate he can possibly be. Tommy Shimoda’s family and coaches would describe his past year as “amazing”. From world games, the honorary ESPY, and now the Chicagoland Sports Hall of Fame, many would agree Tommy’s year has been nothing short of amazing.