Special Olympics Illinois Board Chair and Managing Director at Goldman Sachs, Jenny Fortner, first got involved with the organization at the University of Chicago where she attended college. She volunteered with the Women’s Athletic Association, and her varsity basketball team helped with Spring Games her sophomore year. Between the sportsmanship, team orientation, and inspiration she was reminded what sports are supposed to be about. 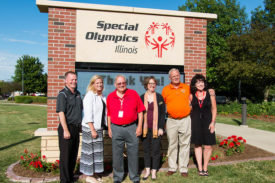 “It struck me so much at that point in my life. That first day, literally, I was hooked.”

As a collegiate athlete, Jenny finds competition and sports particularly important – so ensuring those with intellectual disabilities are afforded the same opportunities has become her passion.

“Competing for anyone is about digging inside and being more than you thought you were capable of becoming.”

Since college, Jenny has gone on to support Special Olympics Illinois in multiple facets. She serves as a sponsor, volunteer, board member, donor, family member, and this year she adds Co-Chair of the 10th Annual Inspire Greatness Gala to that list.

The Inspire Greatness Gala is the largest single-day fundraiser for Special Olympics Illinois. In 2016, the Gala hit a new milestone when it raised $1,000,000 for the 23,000 athletes throughout the state.

“These funds make a huge impact on so many lives. In addition to the Gala just being a really incredible and fun evening, it’s inspiring.”

When asked what keeps her so committed to Special Olympics, Jenny simply credits the athletes.

“When you see what the athletes overcome each and every day, it makes it easy to be involved. You wish there were more hours in the day to do more.” 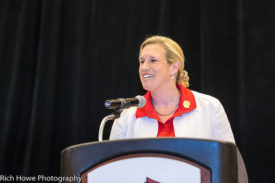 “Special Olympics has given me more than I could ever give it. It has profoundly changed my life for the better.”

“50 years ago we were embarking on a new time in history for those with intellectual disabilities and we are at that point again in terms of choosing to include and being the example of what it truly means for being an inclusive city.”

Jenny’s advice to those who haven’t gotten involved in Special Olympics?