On February 6th, 7th, and 8th, Galena will once again welcome athletes from throughout the state for the Special Olympics Illinois Winter Games.  It will also be one particular athlete’s chance to be golden… again.

Just a few months before the first Special Olympics games at Soldier Field in Chicago, the world welcomed Mike Barry. Now, almost fifty years later, Mike has accomplished more than many would ever dream to do in a lifetime.  After all, how many of us can claim that we compete, and win, in a myriad of sports including Alpine Skiing, Track and Field, Softball, Golf, Volleyball, and Basketball.  Mike has done so and in fact, he was been named a Special Olympics Illinois Athlete of the Year, and has participated in the national and international Special Olympics Games. 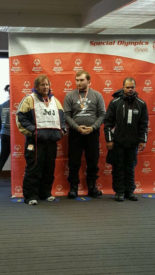 One of Mike’s first opportunities to shine came when he was in Monmouth High School.  His Special Education teacher was also the Track and Field coach, and recognized that Mike had athletic skills. “He invited Mike to compete on the school team and all his team mates embraced him” says Cathy Betar, Region F Director for Special Olympics Illinois, “and that was long before inclusion was a thing like it is today.”

The desire to be inclusive is one of the many qualities noted about Mike by his peers.  For example, when asked about Mike’s abilities, his current coach for the Warren County Special Olympics Falcons, Tom Glenn, says, “He’s a leader in a quiet way.  He’s always positive and he has the ability to perform under pressure.”  Mike and Tom met in May of 2015 when Mike was preparing to go to the Summer Games in Bloomington, Illinois, and has been inspiring Tom ever since.  “He loves Special Olympics and he loves competing” says Tom. “He enjoys his teammates and his coaches, and he never has an unkind word or poor sportsmanship in any way.”

The inspiration continues when Mike isn’t competing, as he brings joy to customers whom have seen him at work at Cerar’s Barnstormer Steakhouse restaurant in Monmouth for over 20 years.  “That boy rides his bike here regardless of the weather” says Lori Callihan, Bar Manager, who has known Mike for over 30 years. “He has the biggest heart.  Whether it’s a job or a favor, Mike never says no. He is just a giving person throughout every aspect of life. He inspires all of us because, well, he is just so sweet. He does the dishes and smiles the whole time he does it.” 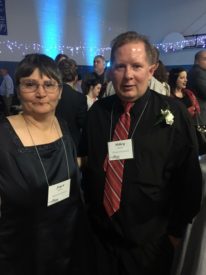 Mike gives a whole new meaning to the word drive, too, not referring to the act of making a car move. Driving an automobile is one of the few things that Mike doesn’t do, but that didn’t stop him a few years ago.  Cathy Betar recalls, “He had missed his ride to compete in our Spring Games so he jumped on his bicycle and rode it 16 miles just so he could compete.”

Mike is driving, again, in another way to help his wife, Joyce, as she undergoes cancer therapy.  “Mike has always been there for Joyce supporting her.  As an athlete, when I first met him, he was being positive and encouraging her to do her best” says his coach, Tom.  “During Joyce’s illness he has been like a rock and very positive and always has a good outlook.”

The state, the nation, and the world are preparing to come together this July to celebrate the birth of Special Olympics fifty years ago.  It was at those first games when many people had their first glimpse at the athleticism, drive, and compassion shown by their peers with intellectual disabilities.  And as friends and family help Mike Barry celebrate his 50th birthday, they, too, will be celebrating a man whom has demonstrated his athletic abilities and drive, while encouraging and bringing joy to others.

Happy Birthday, Special Olympics.  Happy Birthday, Mike.  Thank you both, for providing inspiration for so many, and for demonstrating that love for others is truly golden.