Across the United States, law enforcement officers carry the Special Olympics Torch on intrastate relays, running for a common cause that takes them through blizzards in Alaska, the daunting Florida Everglades, the endless farm land of Illinois, and the deserts of Arizona to bring the torch to the Opening Ceremonies of their state’s Summer Special Olympics Games.

The numbers are impressive. And the Special Olympics Law Enforcement Torch Run continues to grow.

The Torch Run began in 1981, when Wichita Kansas Police Chief Richard LaMunyon saw a need to raise funds for, and awareness of, Kansas Special Olympics. LaMunyon felt that Special Olympics was a fitting cause to unite local law enforcement officers, giving them closer ties to the community and to a very special population.

The Torch Run grew enthusiastically through increased support of the Adopt-A-Cop program, a donation program built for businesses, service clubs, and schools. The naming in 1988 of Arnold Schwarzenegger as the Official Honorary Chairman served notice that the Torch Run had arrived. 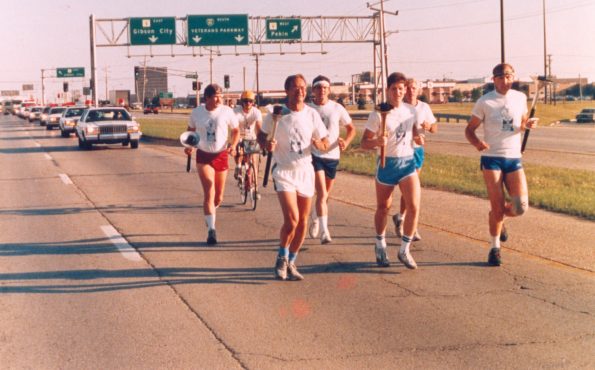 How to get involved

Dunkin’ Cop on a Rooftop

Run WITH the Law