Illinois Teams with a Unified Dream 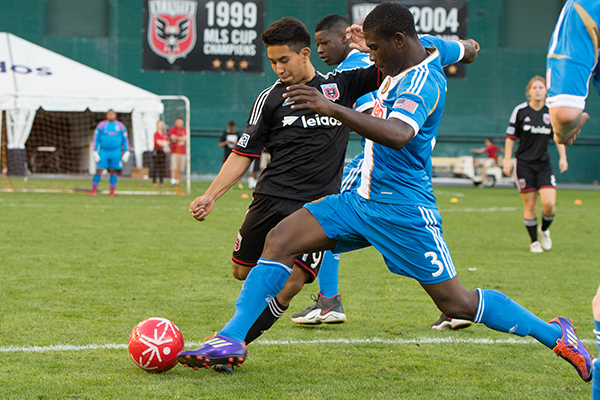 Striving towards social inclusion through the Special Olympics Unified Cup

CHICAGO – The 50th Anniversary of the Special Olympics this year will introduce a new phase in the world of Unified Sports, a program that works to bring people with and without intellectual disabilities together to compete on the same teams. The transition into a new phase of social inclusion is marked by the first ever Special Olympics Unified Cup, and will continue to challenge the way people view those with intellectual disabilities. Given this opportunity, the male and female Unified soccer teams representing Illinois in the tournament are excited to achieve a new level of equality in the world for those with intellectual disabilities.

Cori Hoekstraw, a junior in High School, is competing on the female Illinois team. She is a Unified partner, which means someone who participates in Unified Sports but does not have an intellectual disability. Hoekstraw grew up playing soccer and has shared numerous fields with athletes who have intellectual disabilities. One particular experience made her realize that they are not so different from people like herself.

“Society puts a label on people with intellectual disabilities that leads us think that they’re so different from us,” she said. “But in reality, they all see themselves as human beings just like we do.”

Hoekstraw believes that social inclusion is a natural product of different communities working together to celebrate diversity. She describes how her experience of playing alongside them has completely shifted her perspective of them and offers her understanding as a lesson for the world.

“I remember sitting with a group and one of the athletes said, “Guys, I look great today.” Hoekstraw recalls. “It opened my eyes to realize that we deserve to be celebrated equally and recognized for our unique talents.”

This call for equality and recognition of talent has been the foundation of Special Olympics. From the very beginning, this sports organization has been a channel through which athletes with intellectual disabilities could compete and prove themselves as serious competitors. 50 years later, the goal has expanded to promote global unity beyond sports, and the Unified Cup will spearhead this shift. The Special Olympics 50th Anniversary emphasizes the importance of inclusive and unified sports comprised of people with and without intellectual disabilities. The Unified Cup will take place July 17-20 in Chicago, Ill., site of the first International Special Olympics Summer Games in 1968. The Unified Cup will include 8 female and 16 male Unified soccer teams from all around the world. They will compete to win – but, more importantly, to demonstrate what members of an inclusive society can accomplish through mutual respect for one another.

David Dore, a Special Ed teacher at Homewood Flossmoor High School, has been involved with Special Olympics for the past 11 years. He has been a part of the vast and dedicated network of people who have invested their time, resources, and technical knowledge in preparing these athletes. This year, he is a coach for the male Illinois team in the Unified Cup and describes just how special this opportunity is.

As a teacher, Dore hopes that each of his students find what they are passionate about in life. The gift of discovering one’s passion, Dore believes, is what helps a person’s confidence flourish. He sees this phenomenon carry over onto the field when athletes walk away from practice with more confidence, as they are identified by their athletic talents over their disabilities. The Unified Cup gives the athletes a powerful platform to share their passion with the world.

“What’s extremely special about this experience is that the athletes get to represent something much larger than themselves and people will look up to them for that,” Dore said.

The Special Olympics continues to uphold this purpose. However, the new agenda for the organization moving forth is to continue building these interpersonal relationships and encouraging community participation onto a global scale through the involvement of teams from all over the world.

Individuals like Cori Hoekstraw and David Dore share the privilege of being a part of these athletes’ lives through the opportunities provided by Special Olympics. The Unified Cup is a global invitation to come alongside those with intellectual disabilities to witness their talents and be a part of social inclusion at work. The opportunity for these athletes to be treated as equals will not be left on the field, but will be carried out into the world as an example to follow.