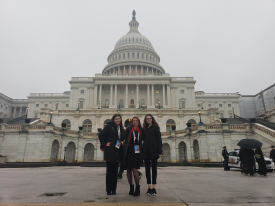 Sophia, Sarah, Courtney participated in eight face-to-face meetings with Members of Congress, inviting their elected officials to partner with them to support Special Olympics Unified Champion Schools® and about the need to end health care and education disparities and discrimination against roughly 1% of the US population with intellectual disabilities.

Sophia and Sarah expressed the impact that Special Olympics Unified Champion schools has had on them and Maine South High School as a whole.  Maine South High School is one of the 268 Unified schools in Illinois. The students shared how they foster a community of inclusion for all through unified activities and other opportunities their club provides. Maine South High school offers Special Olympics Unified sport teams, an inclusion club (Hawk Pals), a unified theater communications class, a program that pairs students for natural social exchanges during the passing periods and a Respect Week campaign that encourages the entire school to pledge to choose to include all individuals. All of our school activities are supported by the school through placement in the yearbook, involvement in the school assemblies and send off parades when our athletes make it to state. Courtney shared the impact of the Special Olympics health programs. 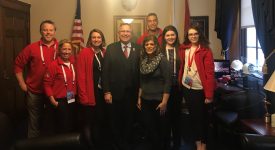 “No one can better articulate a vision for a more inclusive America or demonstrate how a nation can unite as one than the athletes and Unified partners of Special Olympics,” said Tim Shriver, Chairman of Special Olympics. Shriver added, “Our athletes and youth leaders will lead us in the Inclusion Revolution, our collective fight to end discrimination for people with intellectual disabilities.  But we can’t do it alone. We need governmental support to preserve laws guaranteeing the rights and full participation and integration of people with intellectual disabilities into our society.”

In more than 6,000 Unified Champion Schools across the country, Special Olympics has trained youth leaders and educators to create inclusive schools. Students with and without Intellectual Disabilities are playing and competing together through Special Olympics Unified Sports. These experiences help increase acceptance of all abilities in classrooms and are reducing stigma and bullying.

Maine South High school is proud to be able to share and promote the Special Olympic mission.