For Special Olympic Illinois athletes Alyssa SanFilippo and Chris Jorjorian, senior year in high school are all about making memories, attending football games, hanging out with friends, and trying to avoid senior-itis. But their friends at Naperville Central High School decided to add one more memory to their list before they graduate. Royalty.

Alyssa and Chris have been dating for three and a half years since meeting at a school dance. Their plan after graduation is to attend a post-graduate school in District 203 called Connections where they will continue to receive services as needed and through a variety of courses, start to explore their levels of independence. During her time at NCHS, Alyssa joined Special Olympics – she now competes in basketball, bowling and athletics. Chris has also been competing for quite some time in basketball and track and field. 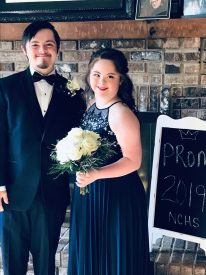 It’s safe to say that Alyssa has her father, John, wrapped around her finger.

“The school staff, teachers, and through them, the student body, have created an environment of inclusion at a level I have never witnessed before,” John says.

“My daughter and Chris are celebrated throughout the school as the “Power Couple” and have developed long-lasting friendships.”

John and his wife would often wonder and worry about the things they assumed Alyssa would miss out on, like homecomings, boyfriends, and “normal” friendships.

“Not only has she enjoyed a fruitful and fun school career, but she has also risen to the top, never failing to reach a target set before her,” John continues. “For that, I extend a very appreciative THANK YOU to Naperville Central High School, its staff, and most importantly the greatest student body I have ever had the pleasure of meeting.”

Alyssa and Chris wear their crowns proudly, even competing with them at the Special Olympics Illinois Region C Spring Games. If you see them walking the streets of Naperville or competing at the next Special Olympics event, be sure to say hi, or better yet a curtsy because it isn’t often you meet royalty.