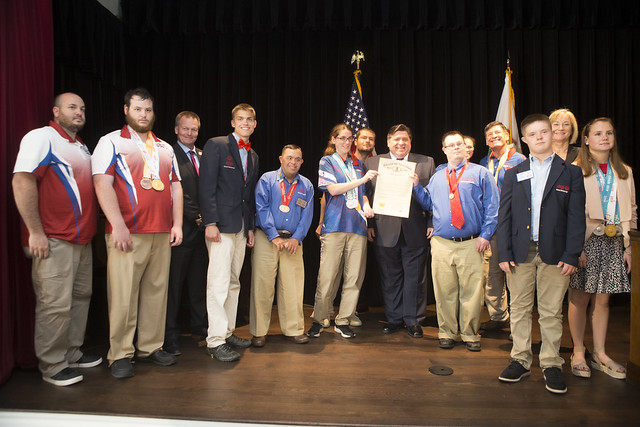 On May 29, 2019, First Lady Pritzker invited Special Olympics Illinois athletes and leaders to a special lunch. That afternoon, a small group gathered at the Illinois Governor’s Mansion (also known as the “people’s house”) to be honored. The afternoon kicked off with a tour of the historic property in Springfield, Illinois. Then, one by one, athletes and their family members introduced themselves to Governor JB Pritzker and his wife, MK.

First Lady Pritzker then presented each athlete and Unified Partner with a certificate for outstanding achievements within Special Olympics Illinois.

Later, Governor Pritzker tweeted his excitement over the afternoon’s festivities saying, “Each of you makes each of your communities happier, better and more inclusive.”

We thank the Pritzkers for their generous support of the athletes and their families and look forward to celebrating May 29 for years to come!