Ben Simpson has been competing in Special Olympics Illinois for 25 years and is an active participant in basketball, equestrian, golf, snowshoeing, swimming, and his personal favorite, powerlifting!  He is a familiar face at many State Championship events as a competitor, but will also be adding the title of assistant coach to his resume, serving in that role during this year’s Summer Games. 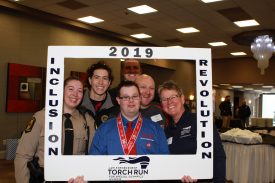