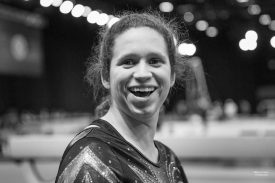 Saneatha has been a participant with Special Olympics Illinois through PTOEC since 2014. She began in gymnastics and quickly added bowling, swimming, softball, volleyball, and basketball. We quickly realized how athletic she was and how sports became her passion. But her love of sports was not what caught our attention. Saneatha almost instantly became a social being amongst her peers making friends quickly from near and far, which was something I never thought possible since she has always been someone who stays to herself. 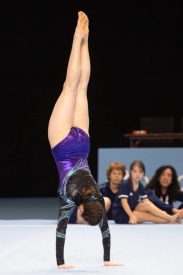 Saneatha has quite the collection of medals from the past few years of competitions. She has been to state competitions in Bloomington for Gymnastics and Basketball, Decatur for Softball, and Rockford for Volleyball. Her most memorable moments were from 2018 and 2019.  During this time, she participated in the Belleville Polar Plunge, Summer Games, Outdoor Sports Festival, State Basketball, and Fall Games. She also participated in Gymnastics at the 2018 USA Games in Seattle, WA bringing home 5 gold medals! Saneatha met a tremendous amount of people during her stay at USA Games from celebrities to other athletes to many fans. I remember telling her to hold on to these moments and cherish them because it would probably never happen again. However, just a few short months after returning home we received a call inviting her to the 2019 World Games in Abu Dhabi as a level 4 gymnast for Team USA! 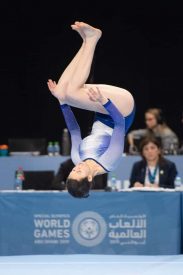 Traveling to the Middle East was never on her bucket list, but Special Olympics Illinois, once again, found a way to show her what she was missing. During this trip, Saneatha and the rest of Team USA left a few days earlier than families to learn and enjoy the customs of Dubai and Abu Dhabi before having the jitters of competition. It was this trip that made everything come together for us as parents and her as an athlete. As we sat at Opening Ceremonies watching the parade of athletes from all around the world, I finally realized my child who has struggled with acceptance, learning, speaking, socializing – this list can go on and on – is truly happy on the inside and out. She walked in that parade like she owned the place! During awards, she was thrilled to just be there, but when the last medal was announced for her division she began to cry. She realized she placed 1st in the world in the Vault competition. She received 3 bronze, a 4th place ribbon, and her Gold. This was her moment along with thousands of others.

During the fantastic and unbelievable year of 2018, Special Olympics was also celebrating its 50th year anniversary. Saneatha wanted to go to Chicago for the event, but we were unable to attend due to the hectic schedule the year brought us and USA Games just days before the 50th celebrations. We still celebrated within ourselves and said a silent thank you to the young lady this wonderful organization has helped her become. We now look at sports as a way for people to come together, lift others up, and celebrate the victories of life instead of dwelling on the defeats.