Rikki was announced as one of the three recipients of the 2019 LETR International Athlete of the Year Award. 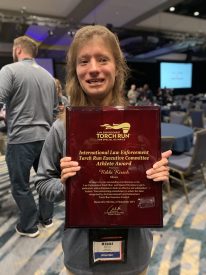 The LETR International Athlete of the Year Award, recognizes athletes for their efforts in athletics, work, and involvement with LETR. The award builds on the commitment of law enforcement officers by recognizing a Special Olympics athlete who has gone above and beyond in their efforts to support law enforcement.

Across Illinois, Rikki is known for her unwavering courage and passion for competing in Special Olympics

Illinois events. Rikki also has an inside track to law enforcement, as her father works for the Sheriff’s office. 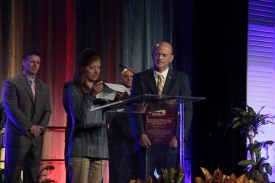 “Rikki has become engaged in the Torch Run movement. She is a fixture at various Torch Run events,” said Katie Risley, Director of Development for LETR.

“It has been an honor to watch her grow and develop into a young leader, and it has been remarkable to observe Torch Run leadership in Illinois truly embrace Rikki as one of their own.” 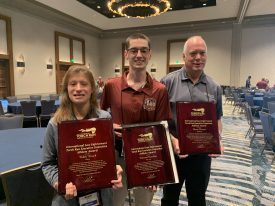 Rikki and her family have attended and actively participated in hundreds of Torch Run fundraisers and activities. She has taken on the responsibility of traveling to many police departments throughout the state. There, she would talk about why police officers need to be involved with the Torch Run. She is so inspiring, many of those departments have become active for the first time or re-energized to do more.

Rikki is an exceptional and dedicated athlete who believes in the Torch Run and Special Olympics, there could not be a more deserving recipient.

“If you look up ‘ambassador’ in the dictionary, you will see a picture of Rikki Kirsch.”