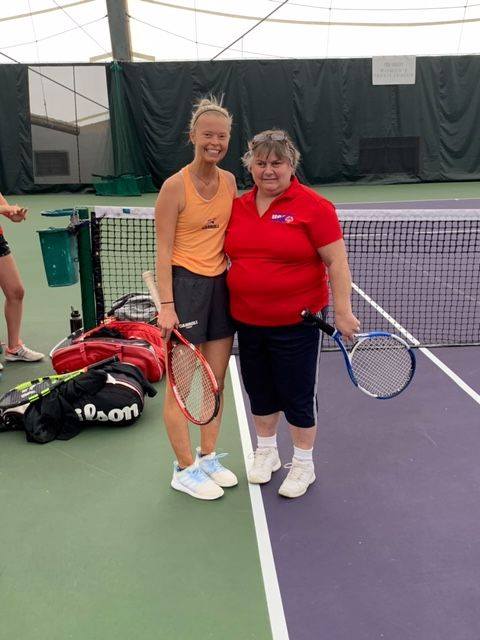 She has been competing with Special Olympics Illinois since 1985. Lisa cherishes Special Olympics for many reasons, some of which provided Lisa the opportunity to play sports, including tennis.

Lisa was honored to take part in such an inclusive event. The experience was exhilarating as it was her first time at a tennis championship of this caliber.

“The CCIW was honored to have Special Olympics Illinois athlete Lisa Menichino on hand to kick off the final day of the 2019 CCIW Women’s Tennis Championship on October 19,” CCIW Assistant Executive Director Mike Krizman said.

At the event, Lisa said a few inspiring words to the crowd, wished the group good luck, and prepared for her honorary serve.

Lisa’s 20 years of tennis experience did not let her down as she served to Carroll University’s No. 1 singles player, Grace Krueger.

“She truly embodies all of the wonderful traits that being a Special Olympics athlete is all about, and we were honored to have her as our guest.”

“We’re proud of our partnership with Special Olympics Illinois,” Krizman continued. “The CCIW looks forward to growing that partnership through additional collaboration and participation in the future.”