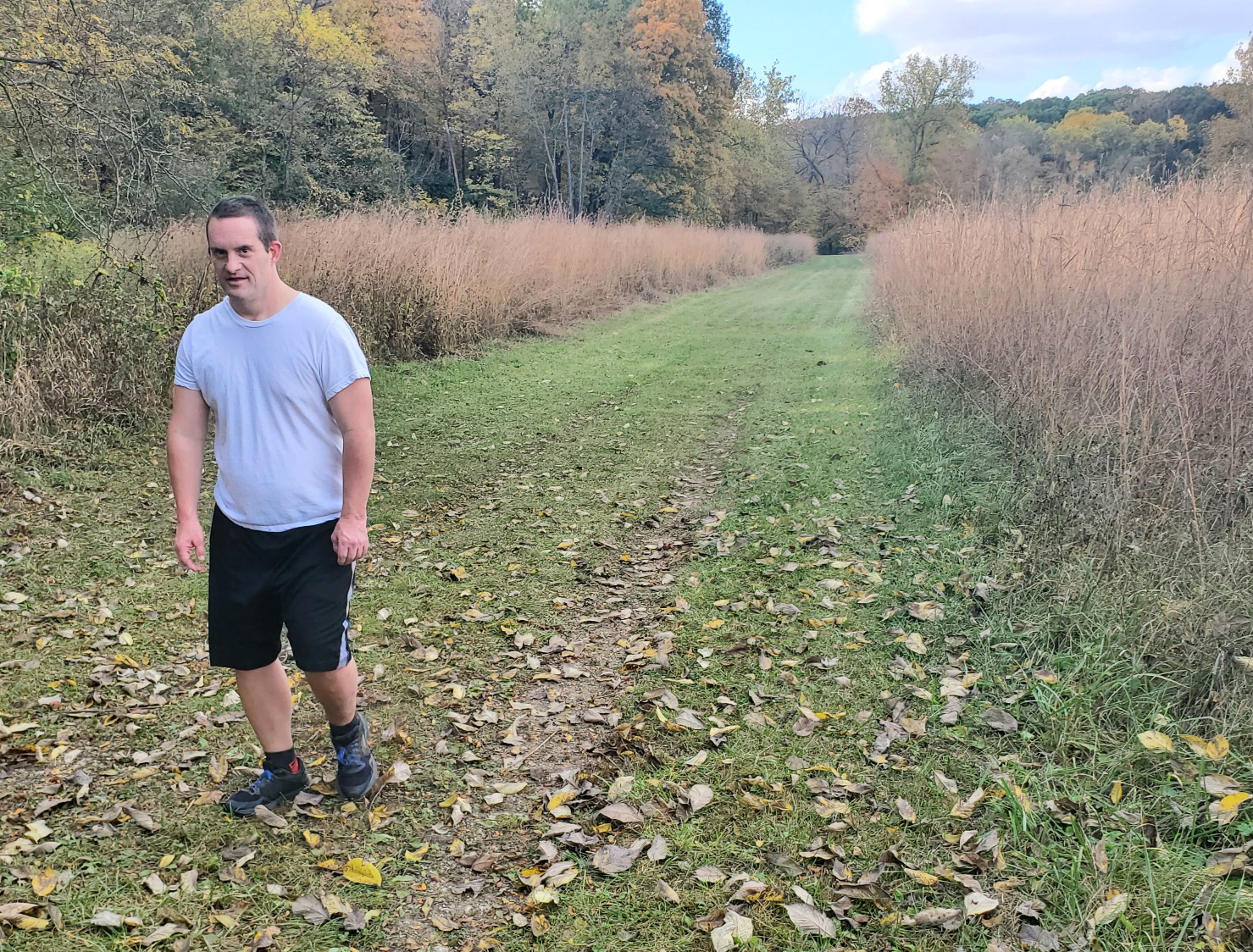 The term “Covid 10” has been on the lips of those who indulged during the pandemic.  The extra french fries or ice cream has provided comfort for some, but that’s not the case for one outstanding athlete named Joel Hensleigh. Like most Special Olympics Illinois athletes, Joel finds joy – win or lose – on the field of play, but recently found comfort and joy in losing more than usual. Joel has lost ALOT. He lost forty pounds, and is enjoying the benefits of his new healthy self every day.

When asked how he did it, Joel’s first response was “eat less sugar and no more junk food.” Along with better eating, the activity that he seems to enjoy the most, though, with physical, mental, and emotional health benefits, is going outside.

Joel admitted that his walks, in the past, may end at a fast food restaurant. Now, however, he walks often in the country near his parent’s home. “No Taco Bell to walk to.  No McDonalds nearby” says Joel’s mom Debbie. Instead, Joel found a love for vegetables and he and his dad, David, have creative and delicious ways to cook and enjoy them.

“We make pizza,” says Joel “and we use spinach, kale, mushrooms, zucchini, turkey pepperoni, onions, bell peppers, and a little bit of cheese.” Joel called another favorite “Mexican salad with a kick and a crunch” and said it contains “lots of greens, turkey meat with spices, and tortilla chips.” Fish or shrimp tacos also top the list.

Joel enjoys his new healthy self, and noted that he “feels 25 years younger.” He also said that his knees feel much better, which is a big plus when bowling. When competition returns, Joel will be in the bowling alley where he enjoys competing with both his Special Olympics Illinois league and another local league.

Joel became a Special Olympics Illinois athlete when he was seven years old and, along with bowling, has competed in volleyball, softball, powerlifting, track, and now golf.  When asked about his favorite sport, though, he answered,  “Basketball is my life!” He is working on perfecting his jump shot.

Along with physical benefits that accompany living healthier, Joel is now registered as a Special Olympics Illinois Health Messenger. This will allow him to help others become motivated to change their lifestyle, too, and enjoy better health.  It is no doubt he will excel in this new role.

Heartwarming stories like Joel’s provoke a certain desire to shout “woohoo!”  It was that same sense that captured hearts at the United Center several years ago when Joel played during halftime at a Chicago Bulls game. “The Bulls weren’t doing well that night” recalled Joel’s mom, Debbie, “but when Joel’s team was playing, the crowd cheered the loudest.”

Joel Hensleigh is an inspiration. He will humbly continue to clean at the YMCA and help others. He will continue to be a great son, brother, and friend to so many. He will continue to exercise and eat well, now knowing the benefits.  The fullest benefits, however, are those that Joel may never see. Those will come through those he inspires from afar. Whether in the stands, in the store, or passing him on a walk, Joel has a contagious spirit. If you are fortunate enough to catch it, you too will be compelled to shout, “woohoooooooo!”

Joel’s inventions (with a little help from his dad)

Veggie Pizza: Use a thin, whole wheat pizza skin (from Schnucks). Spread a thin layer of pizza sauce on it (Joel likes Aldi’s tomato pesto). Joel likes to cook ground turkey with mushrooms, onions, bell pepper, garlic, oregano, and cumin and a small can of spicy tomatoes. Cook that down to make it less juicy. Add the turkey mixture on the pizza skin along with black olives and cherry tomatoes, cut in half. Then, pile on torn up kale or spinach (a lot). Sprinkle with some (not a ton) of grated cheese and bake for 10-15 minutes until cheese is melted and veggies are tender.

Mexican Salad with a Kick and a Crunch: Start with a big bowl of torn up greens (spinach, mixed greens, kale, etc). Halve about 15 little tomatoes, chop half a bell pepper, add about 1/4 cup of humus, a few dashes of hot sauce, some salsa, a squirt of either lite Ranch dressing or olive oil, a little bit of shredded cheese, and about 10-15 blue corn chips, crunched up in your hands. Stir all together and enjoy!

While Special Olympics Illinois has adapted organizing sporting events based on CDC and Illinois Department of Public Health guidelines, as an organization, they are working harder than ever to provide their athletes the means to stay fit and active. They invite you to support their athletes by visiting www.soill.org today and learn more about funding these vital activities.

Region I Taste of Something Special