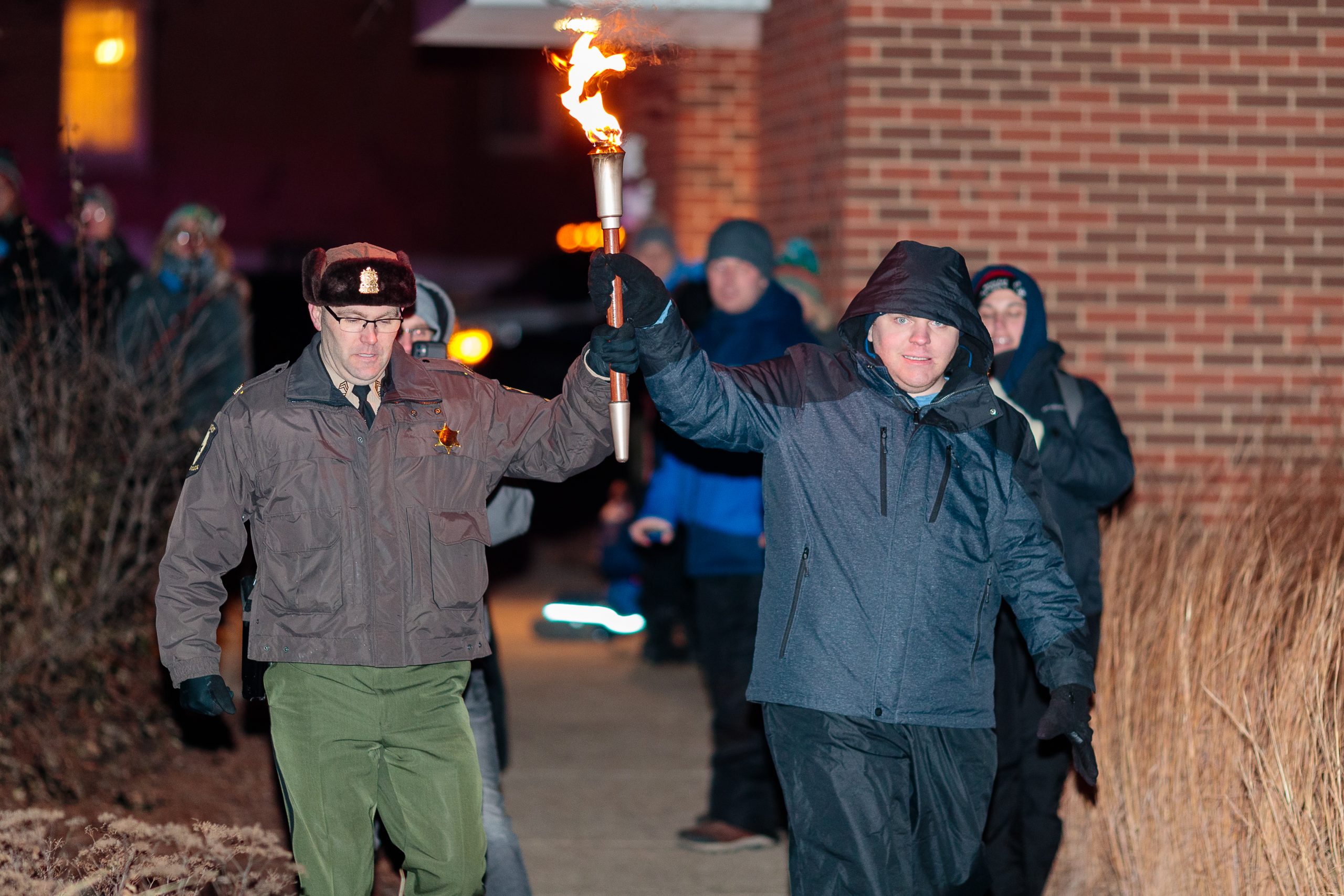 Many people know the name, Special Olympics, and understand what the organization does in the community. But chances are, not as many people have heard the name, Law Enforcement Torch Run, nor do they understand how impactful it and its participants are.

Traditionally, more than 3,000 officers in the state of Illinois run more than 1,500 miles each year carrying the “Flame of Hope” through the streets of their hometowns. Together with Special Olympics Illinois athletes, these officers help to light the cauldron holding the Flame of Hope at signature Special Olympics Illinois events, like Winter Games, which has been held in Galena for the past 41 years.

One state trooper who has been involved with the Special Olympics Illinois Winter Games since 1995 is Master Sergeant Brent Massingill of the Illinois State Police District 16. Officer Massingill, just Brent at that time, was in school at Warren High School near Galena. His student council volunteered at the Winter Games each year by cheering for athletes, helping to carry skiis or snowshoes, or even skiing or snowboarding down the hill with athletes as “snow buddies.”

Fast forward more than ten years later, Brent was working with the Illinois State Police and had the idea to get involved with Special Olympics Illinois again. Challenges with scheduling and finding enough people to participate precluded Brent and his agency from diving back in. Finally, in 2008, Brent took over a safety education position in his district, which meant finding ways to be involved in the community. He and four other troopers decided to volunteer all three days at the Special Olympics Illinois Winter Games. Since 2008, Illinois state troopers from all different ranks have helped out at the Games, but two troopers in particular, Brent and his colleague, Officer Jason Wilson from District 7, have attended every single year since.

After fourteen straight years, Brent says going to Winter Games is something he looks forward to each year. “Sometimes being a police officer is very difficult,” he said, “but it’s great to come around people each year at the Games who are so pleasant and excited to be there.”

Brent, his colleague Jason, and other state troopers will be at the Winter Games again this year, serving as Torch Bearers to help light the Flame of Hope at the Opening Ceremony. Officers like Brent and those at Illinois State Police are integral to the success of Special Olympics Illinois. The organization is grateful to have representatives of the community, like Brent, who devote their time to contributing to our mission.


Learn more about this state-wide championship, being held February 1-3.


Brett and Luke Hanson are 21-year-old twins – with Luke being just minutes older. They are also Special Olympics Illinois athletes having been involved with the organization for more than 15 years. Starting with the Young Athlete program, they now compete in multiple sports, including athletics, softball, basketball, and powerlifting. Brett also tried his hand (technically, his feet) at soccer for a time.

Both gentlemen are members of the S.O.A.R (Special Opportunities in Recreation) team in Bloomington-Normal, the community where they have lived their entire lives.

And now, they are ready for the next step in their lives – which includes being the 2022 ambassadors of the local Bloomington Polar Plunge. The twins have been on hand for past events, including Row 4 Dough, a fitness-based fundraiser, as well as the area’s annual Special Olympics Illinois Region G Golf Fore Good outing.

This assignment as Polar Plunge ambassadors will include live interviews, check presentations, and more. “My brother and I, we can be an example for younger kids,” said Luke.

The twins excitedly described what Special Olympics Illinois has meant to them over the years, both agreeing that the experience has made a huge impact on their lives. Being a part of the community has been “awesome,” Brett explained, and has led to them being the “happiest we have been in our whole lives.”

The experience has also introduced them to many people, from athletes to coaches and volunteers, they may not have met otherwise. Brett explained how it has become a support system for them both, especially as they take this next step.

“Everyone knows we can both do it,” Luke concluded.

Another first for the twins will be actually taking the Polar Plunge on February 26 at Miller Park Lake. “We’re going to freeze our legs off,” declared Luke. “Yes, I always say that too,” Brett quickly added. “But, it’s worth it.”

Supporting the athletes of Special Olympics Illinois, like Luke and Brett Hanson, is certainly worth it. The annual Illinois Law Enforcement Polar Plunge brings together thousands of warm-hearted individuals from across the state.  It’s a great way for everyone – individuals, organizations and businesses to support the life-changing programming provided by Special Olympics Illinois.

If you would like to commit to be bold and get cold this winter, visit plungeillinois.com today to learn more and find your local Polar Plunge.

Our Life in Special Olympics


Each athlete at Special Olympics Illinois has their own unique story. We recently received a letter written by twin sisters, Jean and Jan, from Region I about their experiences with Special Olympics that we wanted to share.

We live in Lincoln and we own our house. We are very involved with Special Olympics.

We compete in athletics (track & field), bowling and basketball! We have raised money online every year we did not have a Polar Plunge. Jean and Jan both raised over $1,200. We work very hard on raising money and we love it!

We love to read Special Olympics books. We order them from Barnes & Noble.

We also did some Special Olympics in school in San Jose, IL. We love doing that too.

As this year comes to a close, let us all remember the things that matter most – family, friendship, and togetherness. Thank you to every athlete, volunteer, coach and staff member who helped make 2021 an amazing year at Special Olympics Illinois! May 2022 continue to bring joy, inspiration, leadership and inclusion for all.

We invite any athletes who would like to share their Special Olympics story and photos with us to email marketing@soill.org*.

Happy New Year from your friends at Special Olympics Illinois.

*Please note that stories/photos sent to SOILL may be shared on our website and/or social media pages, however, it is possible that not every story received will be shared.

There were roughly 400 athletes competing Saturday, December 4, in the Special Olympics Illinois State Bowling Tournament at Peoria’s Landmark Lanes. Each had a story unique to them.

Amid this mass of heart-warming tales, played out in three shifts on Landmark’s 50 lanes, were two of the most inspiring stories you will find.

One belonged to Mike Brennan, a 58-year-old from Monmouth whose journey includes a broken neck and five cervical spine surgeries. Yet, there he was, ambulating with his walker and competing in ramp bowling for the Warren County Falcons.

“I had 89 the first game, 91 the second game,” Brennan said, a bronze medal draped over his University of Iowa sweatshirt. “I’m pretty happy. Third place is pretty good.”

Another dose of inspiration came courtesy of Aldon Marley, a Lawrenceville man who, along with his wife, Kelly, saw staffing and financial shortages three years ago eliminate bowling as a sport for the Lawrence/Crawford Association for Exceptional Citizens (L/CAEC).

They love bowling. Their team was gone, but another formed. They joined forces with Debbie Mikeworth and her daughter, Stephanie — Kelly’s sister and niece. They filled out the forms necessary for certification as Class A Coaches so Aldon and Kelly could continue to compete in bowling.

“We don’t have a really big team, but I have a little team,” Aldon said, smiling. “I’ve got my own team right here. A family team.”

Athletes and coaches with the Warren County Falcons consider Mike Brennan to be family. He has been participating in Special Olympics events for 51 years.

He competed successfully in basketball, volleyball and athletics (track and field) early on, but suffered a broken neck in the late 1980s. The five surgeries followed and Brennan now competes in ramp bowling and the assisted walk in track. He will tell you he “retired” from the other sports.

Asked if he encourages others to participate in Special Olympics competition, he said, “Yeah, I try to. It’s hard work. It’s pretty fun.”

“He smiles all the time. He has a good outlook on things,” said Farris, a coach with Warren County. “No matter how they are dealing with anything, he’s right there. He’ll pat you on the back.

That “can do” spirit exists in Aldon and Kelly Marley as well. They met at the L/CAEC agency in Lawrenceville and among their early activities together was a bowling event in Effingham.

“I can tell you what color shirts we had on … orange ones,” Aldon said proudly.

Engaged on Friday the 13th and married for 10 and a half years, they also have participated in Special Olympics bocce ball, basketball and basketball skills.

Both took part in Region I bowling competition this year. Aldon advanced to state with a first-place finish. Kelly placed second, so was in Peoria to cheer on her husband along with Debbie and Stephanie.

Aldon rolled games of 131, 111 and 117, placing fifth in his division. Earlier, he choked up when asked about how family made his first state singles appearance possible.

“It’s emotional for him,” Kelly said.

The Marleys practice bowling in Vincennes, Indiana, making the short drive on their own from Lawrenceville. Often they are joined by Debbie, Stephanie and other relatives, so even practice is a family affair.

When it’s time to compete, Debbie offers this simple reminder:

“We always say, ‘Have fun. It doesn’t matter if you win or lose as long as you’re here having fun.’”

To support athletes like Mike and Aldon as well as the competitions they attend, please click here.