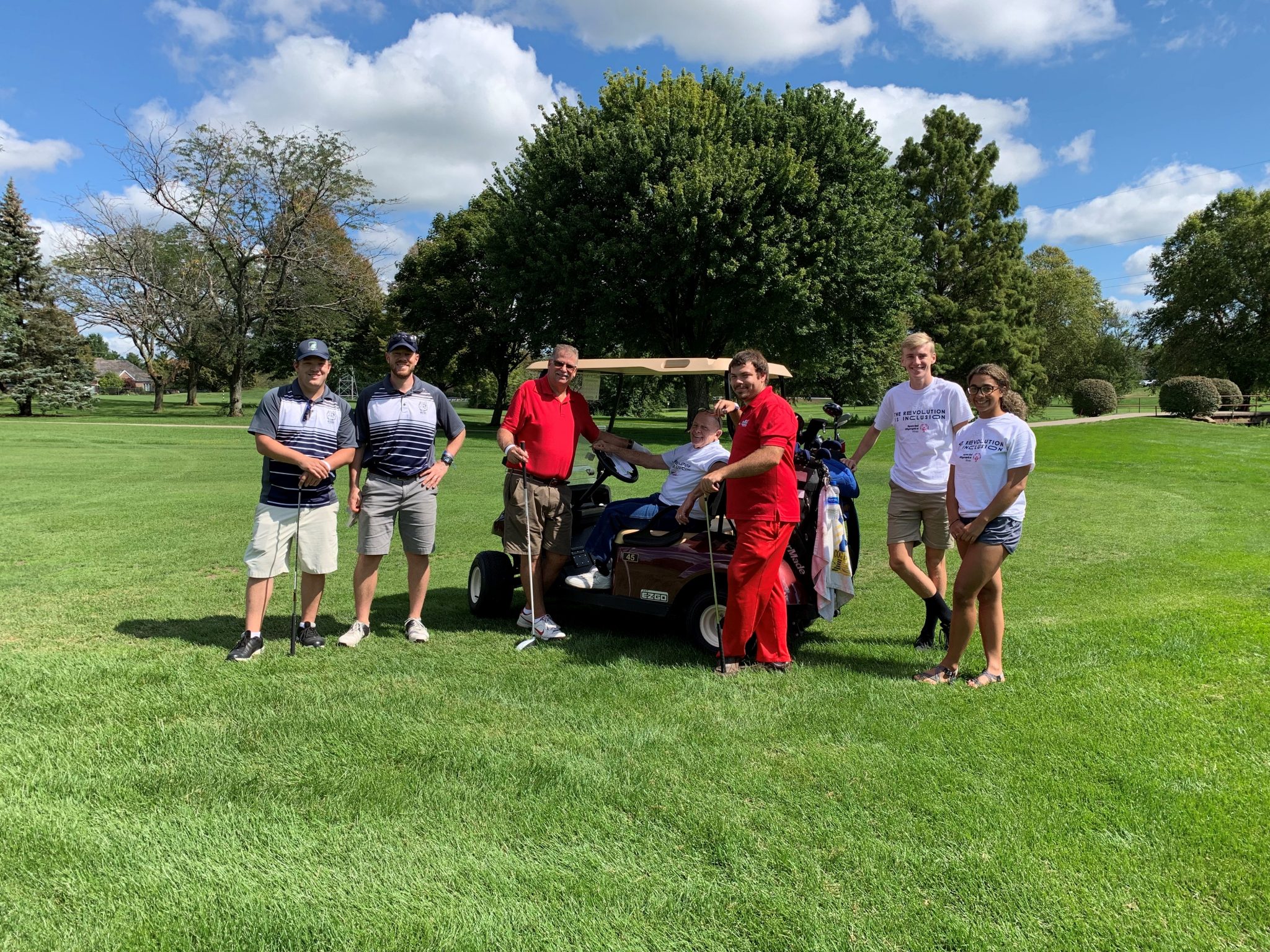 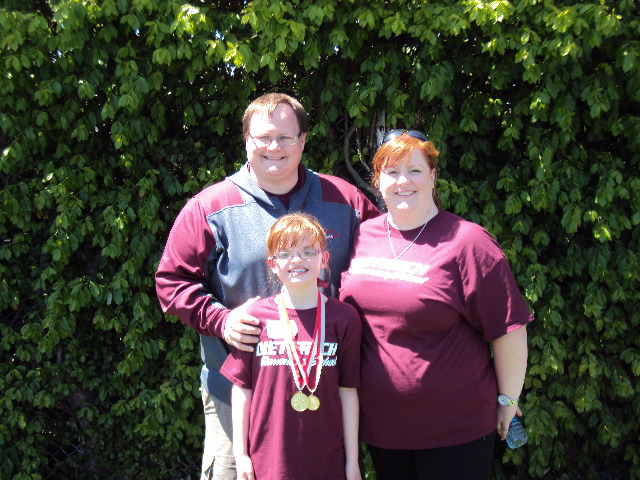 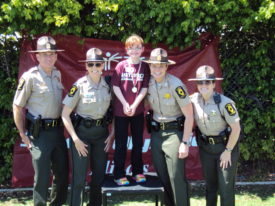 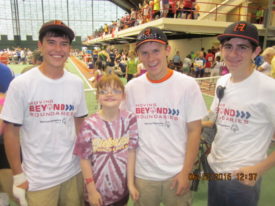 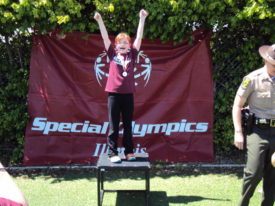 A Will and A Way 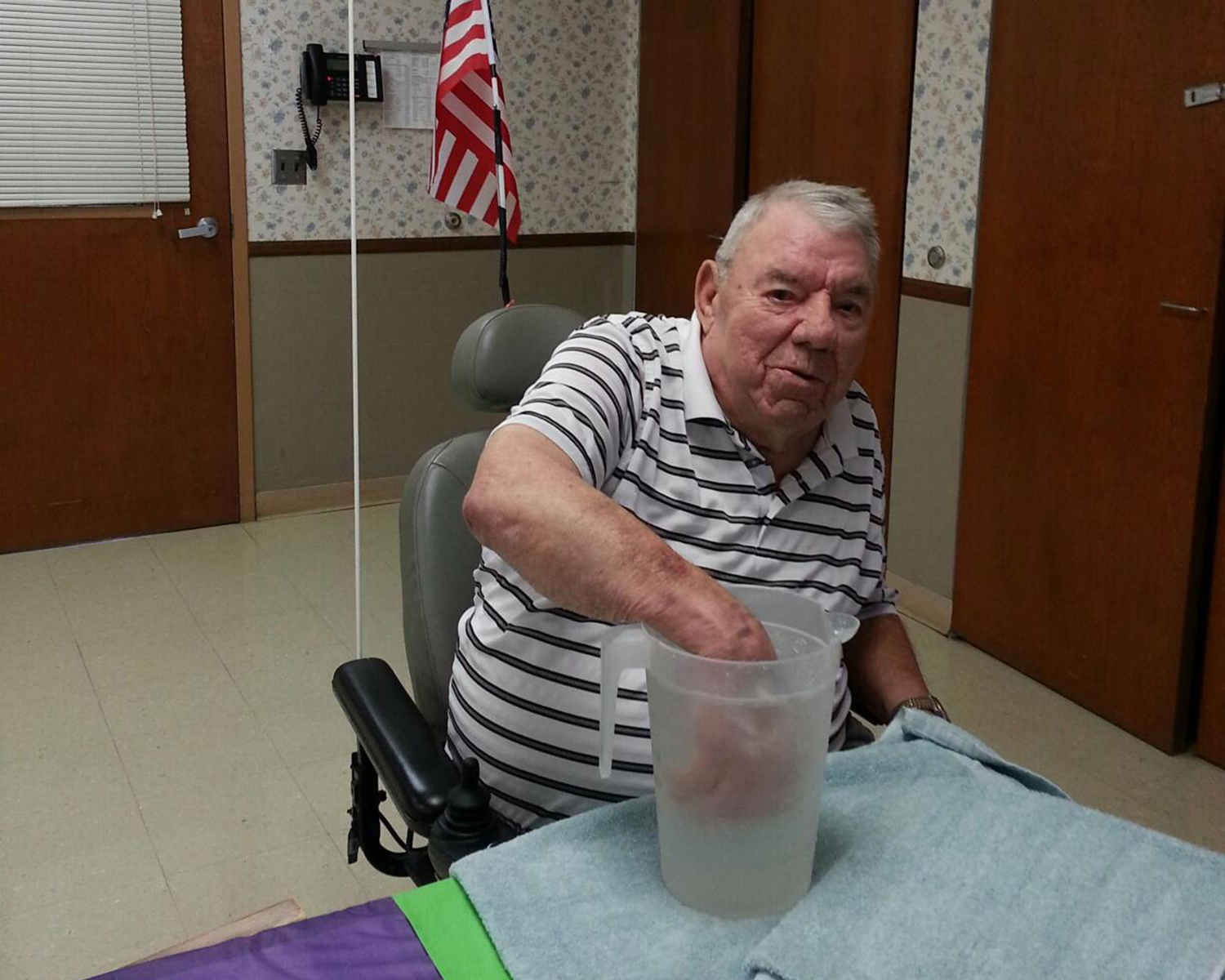 When Speech Pathologist and SOILL Family Ambassador, Kathleen Williams, wore her Law Enforcement Torch Run Polar Plunge hoodie on the job, she didn’t know that she had an admirer.  Then one day when 92-year-old Lyle Cole asked Kathleen how he could get a shirt like hers, the challenge was on.

Kathleen explained to Lyle that he would have to raise $100 for Special Olympics Illinois, AND that he would need to plunge into frigid water to earn his own hoodie.  Normally either one of those criteria may cause someone to take a pass, especially if you are a 92-year-old resident of a skilled nursing home.  After all, it is only a hoodie, right?  Wrong. It is a challenge that Lyle now takes on each year with a passion.

Emerson Hjort, Kathleen’s daughter whom is a Special Olympics Illinois athlete AND Global Messenger, has accompanied Kathleen to Lyle’s home and has met Lyle several times.  It is unknown if it is Emerson whom provided the motivation for Lyle to become a Polar Plunger, but he takes the challenge seriously.

Lyle starts in December to get to his first objective, which is to raise $100, and has done it for two years now.  But as any plunger knows, earning the money is often the easier part of meeting the two-part objective.  Now on to the plunge in frigid water to complete the task.

Some plungers dive right in.  Others go waist-deep.  Others get to their knees while splashing their hands in the water.  As for Lyle?  He plunges right down deep to the elbow.  It works!  The water is cold in his plunge bucket, but the warmth in Lyle’s heart may actually cause that water to steam someday.

Thanks, Lyle.  You’ve proven to us all that when there is a will, there definitely IS a way. 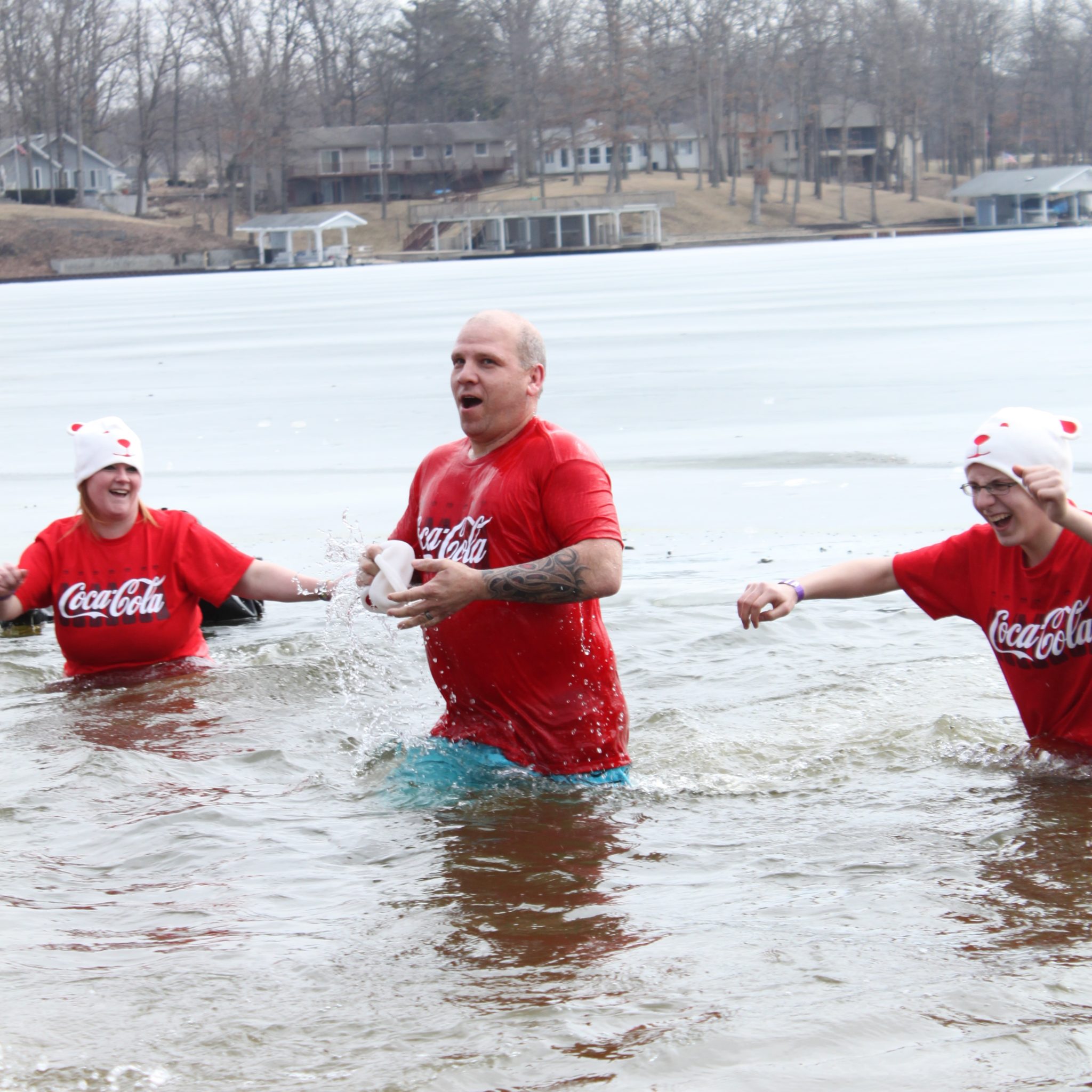 CHS Trojans Give Special Olympics Athletes a Night to Remember 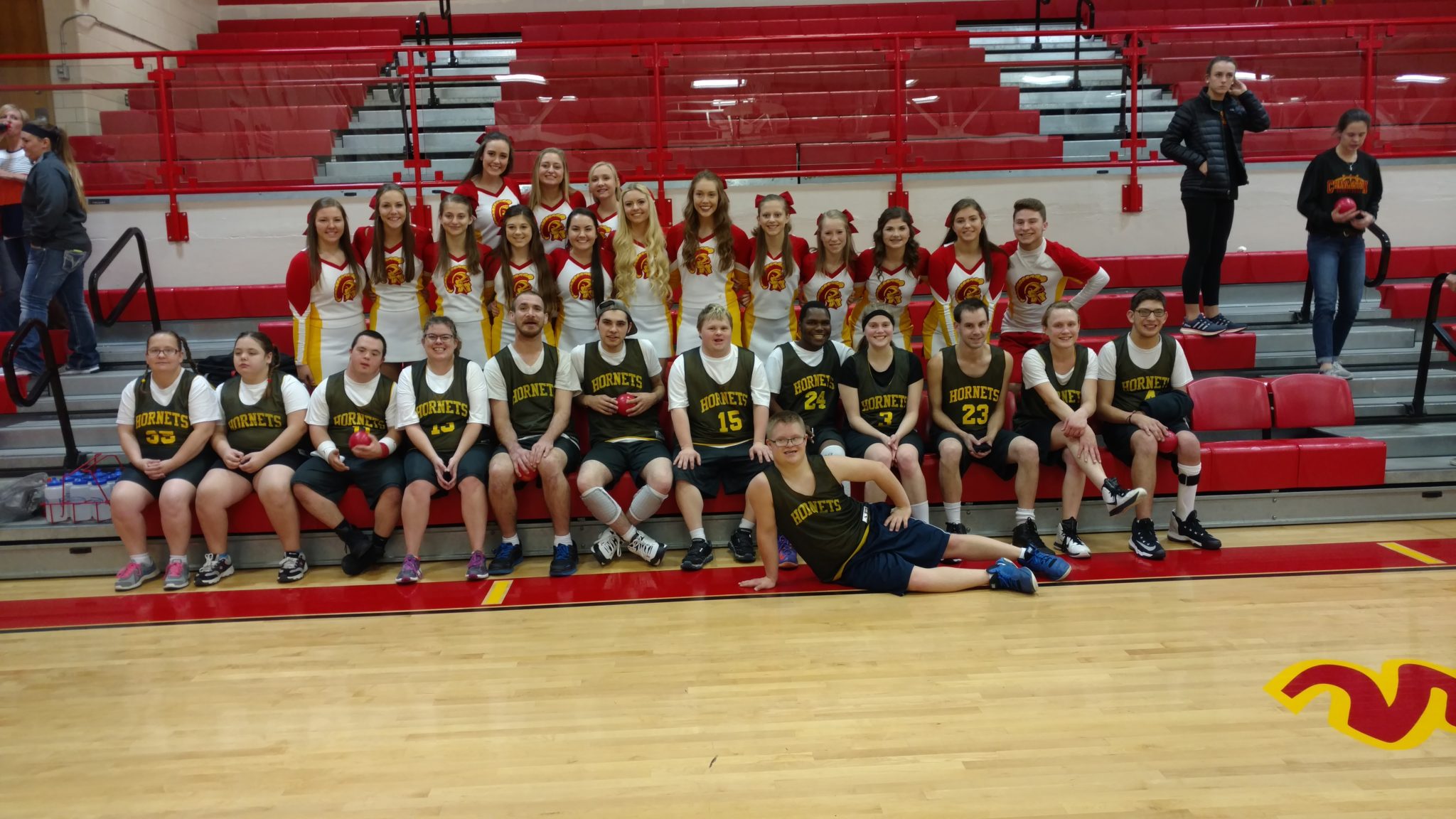 Charleston High School’s “Meet the Trojans Night” has traditionally been an event hosted by the high school boys basketball team to introduce both the junior varsity and varsity team members.  Then, the CHS players play a game against each other to kick of the year and boost fan enthusiasm. 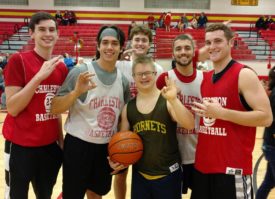 Then, Charleston High School boys varsity and junior varsity teams were introduced to the fans, as well as the CHS cheerleaders, who were especially well received by the Special Olympics athletes. A fun and fast-paced first half seemed to fly by before it was time for the Mattoon/Charleston Hornets to scrimmage with the varsity CHS Trojans. 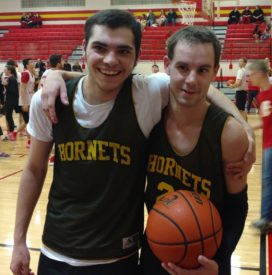 The 20-minute running clock scrimmage did not disappoint! While some fans were well aware of the ability of the Special Olympics athletes, some were in awe as they watched the Hornets go from single digits quickly to 26 points on the board. The Trojans were quick to rebound and showed strength in a comeback, but overall the M/C Hornets pulled out the victory in a 36-28 victory. M/C Hornets player Jimmy Peterlich, who also attends Charleston High School, scored five 3-point shots. Curtis Covington, Brooke Whitrock and Tyler Hahn of the Hornets also made shots for the win.

“This was such as success, and our students loved doing this for the Special Olympians. We have to do this again next year!” said Amy Jackson, the Charleston High School girls basketball head coach and CHS Trojans Special Olympics team co-coach. Athletes, families and fans will be looking forward to the event next year if the positive reactions seen on the faces of those who attended this year’s “Meet the Trojans Night” are any indication.