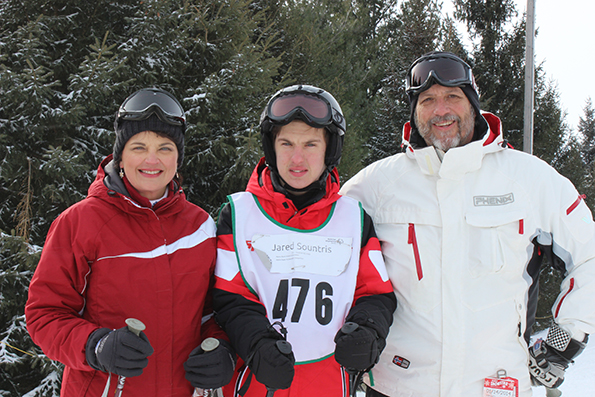 The 34th Annual Special Olympics Illinois Winter Games in Galena provided Special Olympics athletes from around the state a chance to showcase their skills in alpine skiing, cross-country skiing and snowshoeing. For some rookies, it was their first time competing at the state level; for other veterans, it was a homecoming of sorts.

Below are stories of three Level 4 alpine skiers:

The 2014 Winter Games were Jared Sountris’ first. Although he has been downhill skiing for about 8 years, these were his first Special Olympics Winter Games, and Jared was skilled enough to compete in Level 4. It’s safe to say that Jared is familiar with all of Chestnut Mountain’s runs since his father has been a ski instructor at the facility for 31 years. But, it was Jared’s first time to actually stay at the lodge, said his father, David. “Everyone on Chestnut’s staff was very encouraging of him.”

Jared is relatively new to Special Olympics only competing for a little more than a year through Moline High School, where he is a junior. He competed in athletics and bowling last year, earning a gold medal in bowling. In fact, his teacher made the trip to Galena to see Jared receive his two 4th place ribbons and she attended the dance Wednesday night with him.

Jared’s parents are hoping that through Special Olympics, he will be become more involved with his peers. “While he socializes well with the people I work with, there’s not as much interaction with kids as we’d like,” said David Sountris. Mike Barry of Monmouth is a veteran when it comes to Special Olympics Winter Games. He currently competes in alpine skiing Level 4.

Mike began competing in Special Olympics when he was in high school and about 15 or 16 years old. He’s also competed in volleyball, bowling, basketball, softball, athletics and soccer.

He works full-time at Cerar’s Barnstormer restaurant, where he has worked full time doing dishes for the past 17 years. Mike used to work at Warren Achievement Center, where is wife of 8 years, Joyce, currently works. Amy guesses she’s been going to Winter Games “maybe from the beginning.” Her sister-in-law and NISRA coach Maribeth Hutchison agrees that Amy has been a fixture at Winter Games. And, it’s a family affair that includes John Hutchison, Amy’s brother and Maribeth’s husband, who volunteered at the snowshoeing venue.

Amy began attending Winter Games as a figure skater; she even competed in the World Winter Games in 1989 and the Alaska pre-Games competition in 2000. Then she switched to cross-country skiing and  about 10 years ago began alpine skiing.

At the 2014 Winter Games, Amy won gold and silver medals in alpine skiing. “I did it for myself!” she proudly exclaimed.