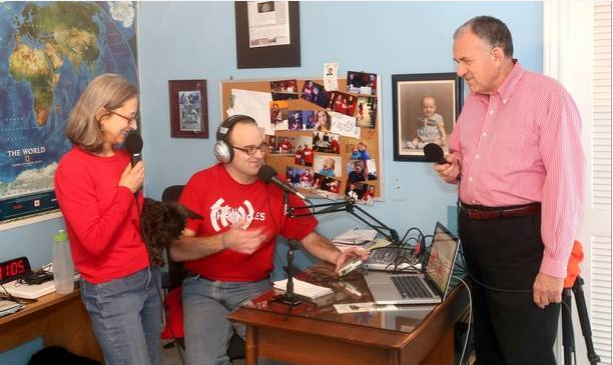 By Elena Ferrarin Reprinted with permission of the Daily Herald

The 25-year-old Westmont man is the founder and executive director of Special Chronicles, which produces podcasts, news and opinion pieces featuring the voices of people with special needs.

Daniel does all this with an insider’s perspective, because he has a learning disability and a speech disorder.

“I struggle expressing myself. It may be hard for people to believe because of what I do,” he said.

His words come slowly, sometimes with a stutter. At times, when he’s excited, they seem to rush out of him.

“It’s hard getting the words out. If it’s a hard word to say, I have to think of another word to say instead.

But even that is a struggle, because it’s really hard for me to process information,” he said.

Special Chronicles has grown from the occasional podcast in late 2008 to a weekly podcast featuring people with disabilities, their friends, their families and anyone with connections to the special-needs community.

“Our mission is giving respect and a voice to people with special needs,” Daniel said.

The podcast — which has listeners in more than 80 countries and attracted more than 300 unique listeners in January — was nominated for the 2012 About.com Reader’s Choice Awards and the 2011 Catholic New Media awards, Daniel said.

Daniel, a 2012 Roosevelt University graduate who majored in journalism, was a recipient of the Les H. Brownlee Scholarship from the Chicago Headline Club. Over the years, Daniel has interviewed more than 65 people from as far away as Australia, the Philippines and Singapore.

“I just like to tell our stories. It feels inspiring to talk to a lot of people and to hear their stories,” he said.

It’s especially poignant to tell such stories without video, using only audio and photos, Daniel said.

“People can focus on our abilities of what we can do, so people can really hear our voices,” he explained.

The school honored Daniel with the Matthew Freeman Award for Social Justice in spring 2012 for his efforts in promoting awareness of disabilities.

“Most people gravitate to what is easy for them, not what’s hard. He gravitated to what is hard for him, which is to his credit,” Litke said. “What’s amazing about him is his curiosity, his interest in other people’s stories and his desire to communicate those stories to other people.”

Daniel was always eager to use any resource available to him, which was among the keys to his success, Litke said.

“It’s really never about how significant the disability is, it’s how motivated they are, the fire in their belly,” she said.

“His persistence, his drive was huge. He never complained, he never stopped pushing himself. I think we were all teary-eyed on the day he walked across the stage (at graduation).”

Daniel was born prematurely at less than 25 weeks, and a lack of oxygen to his brain likely caused his disabilities, said his father, Adam Smrokowski.

“His brain takes a few extra seconds to process things,” he said.

“In his case it didn’t damage any of his intellect or anything like that. It just slows everything down by a few seconds. Sometimes it’s dramatic and sometimes it’s not relevant.” His parents instilled the importance of perseverance in Daniel.

“ ‘I don’t care what the world has to offer, or what challenges you have, you don’t give up.’ That’s what we always told him,” Adam Smrokowski said.

They also encouraged Daniel — just as they did his younger sisters — to get involved in sports, but it was hard for him perform alongside, and be accepted by, his peers.

That all changed around age 14, when someone recommended he join the local Special Olympics chapter, the Southeast Association for Special Parks and Recreation.

“With an even playing field he just blossomed. He realized he can do all these things,” his father said.

Daniel has competed in swimming and basketball; this spring, he wants to try his hand at softball.

“It doesn’t matter if we win or lose. All that matters is that we try our best and that we have fun,” Daniel said.

His pride in Special Olympics is palpable.

“The Special Olympics USA Games in June 2014 is bigger than the Super Bowl. We have lots more athletes. We have a lot more medals than Michael Phelps or the other Olympians,” he said.

In the last five years, Daniel has given more than 20 speeches, including those to students in Arlington Heights, the Elmhurst Police Department and the Westmont Rotary Club.

“Daniel uses a lot of audiovisual (elements) when he gives a presentation,” DiGuido said. “He’s our most technically adept athlete in Illinois, and probably in the country.”

Daniel’s contribution to the special-needs community has been priceless, she added.

“The good thing is that he’s evolving constantly,” DiGuido said. “With everything he keeps moving forward and getting better and getting new ideas. He’s very comfortable with change, always trying to improve. I think that’s what so amazing.”

This week, Daniel is at the Special Olympics Illinois Winter Games in Galena, where he is recording audio for podcasts and interviewing local athletes as a freelancer for the Bugle newspaper in the Western suburbs.

When Daniel started attending Westmont High School, his special education team had put together a plan for him to find work after graduation, his father said.

But Daniel was always adamant he wanted to go to college.

“Knowing that everyone in my family went to college, I wanted to go, too,” he said. “I think now slowly (teachers) are understanding that we can still go to college like everyone else.” “I felt different because growing up I was always really shy and didn’t have a lot of friends,” he said. “There were times in my last year of high school that I didn’t want to go to school. My parents made me go. I felt that people didn’t get me or didn’t understand me, and that was really frustrating.”

Daniel said he now understands his disability better than ever. His Catholic faith is also an important part of his life, he added.

Special Chronicles has filed to secure federal nonprofit status, with the goal of turning it into a self-sustaining new media organization with funding through grants and donations, said Adam Smrokowski, who serves as a board member for the enterprise.

“We want to develop other things we can do to help people with special needs,” he said.

“Daniel wants to help as many people as he can to allow them not to be hampered by any challenges they have but go out and go for their dreams.”

“After I started, I started getting emails and tweets and Facebook messages, and even face-to-face messages. I learned that this is what I’m called to do,” he said. “People need to hear our stories and our abilities.”

Who inspires you? Father Roderick Vonhögen, who created The Catholic Insider podcast, my mom, my dad and my younger sisters.

What’s on your iPod? A lot of Christian and Catholic music.

What book are you reading? I just finished “Fame” by Karen Kingsbury.

The three words that best describe you? Athlete. Communicator. Techie.