The 2022 Southern Illinois University Polar Plunge is in a new location – but this place is not new to celebrating those with intellectual disabilities.

Camp Little Giant at Touch of Nature Environmental Center was once known as the Camp at Little Grassy Lake and this pertinent piece of the Special Olympics history was founded by Dr. William H Freeberg.

Dr. Freeberg had big dreams for people with intellectual disabilities. A native son to Illinois, he was a man who got things done. Raised in an orphanage, Freeberg was an advocate for those who were left behind by society. His lifelong advocacy would benefit people with disabilities in a way that would bring about attitudinal changes throughout the next sixty years. And along with his students, Freeburg would help to develop the special recreation movement in Illinois.

In 1950, Dr. Freeberg earned his Doctorate in Recreation from Indiana University, the first such degree in the nation. That same year, he headed the Southern Illinois University Recreation Department and persuaded University President, Delyte Morris, to acquire a nearby piece of land in the Shawnee National Forest, which became the Camp at Little Grassy Lake.

He established the first residential summer camping program for people with physical and intellectual disabilities affiliated with a university in 1951. This camp was among the first accessible camps in the United States. He wanted to demonstrate how sports and recreation could give people with disabilities confidence and improve their quality of life.

He began the residential camp in an abandoned farmhouse on acreage surrounded with pup tents and counselor/students from his classes.

Eunice Kennedy Shriver, sister of President John F. Kennedy, and founder of the Special Olympics, also had a summer camp for people with intellectual disabilities – in her backyard. She traveled to Carbondale, Illinois to see Dr. Freeberg’s camp in 1961 and was very impressed.  She would later ask him to join a select group to help develop a program of recreation for people with intellectual disabilities. 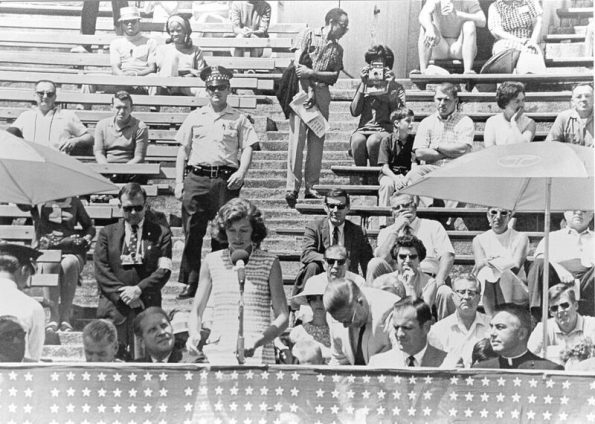 On Oct. 21, 1964, a telegram sent to President Morris from Mrs. Shriver’s husband stated:

I respectfully request SIU lend services of Dr. William Freeberg full time to the Kennedy Foundation for three months for purpose of coordinating Foundation’s nationwide recreation program for the intellectually disabled. Foundation will reimburse Dr. Freeberg’s salary and expenses. Recreation program involves expanding university community and institutional recreation services for intellectually disabled and training of professionals. Dr. Freeberg only man in country with sufficient grasp and knowledge of problem to carry out this most important and vital program.

Dr. Freeberg started conducting workshops for recreation professionals from around the country, teaching them techniques in working with people with disabilities. The Chicago Park District sent 10 representatives in 1965, including a young woman named Anne McGlone (Burke). When she returned to her office at the Chicago Park District, she developed the idea for a citywide track meet for people with disabilities.

On July 20, 1968, the first Special Olympics were held at Chicago’s Soldier Field. The event saw 1,000 athletes from 26 states and Canada participate.

Dr. Freeberg died in 1987. Touch of Nature Environmental Center now operates year-round in a number of capacities serving as a conference center, research site, and provider of therapeutic recreation programs and services to SIU and the larger community.

For more information, watch an informational video about Touch of Nature here.

To learn more, register for this Polar Plunge, or to support a Plunger, go to plungeillinois.com.