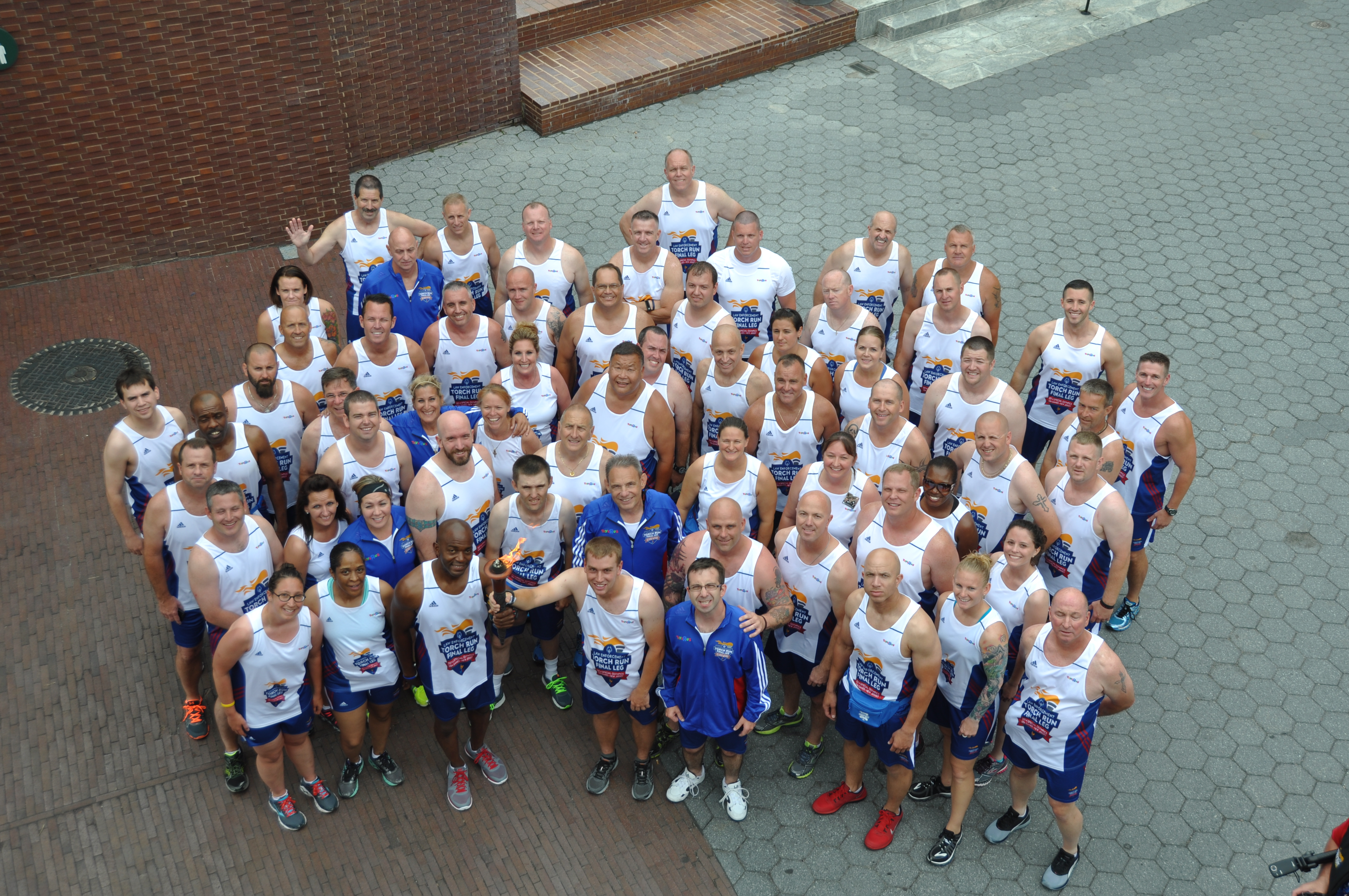 When I was first informed that I was going to be representing Illinois in the 2014 Special Olympics USA  Games Law Enforcement Torch Run, I was very excited!  Then it sunk in that I would be representing the State of Illinois, not to mention Oswego Police Department.  Then I became nervous.  I was not worried about the running so much as I was about tripping or falling or lighting my hair on fire with the Torch, but I got over that fast. Cherese Spears, left, runs with the torch in Final Leg of 2014 USA Games

When I first arrived at Newark International Airport, I was met by the amazing support team who gathered all of the runners together and sent us off to the hotel.  At the hotel, I met my other Torch Run teammates. For those of you who know police officers, you know we have that imaginary bubble around us. It is usually about a 2- to 3-foot circumference. Well, that was in full effect on the first day. As the night went on and we all introduced ourselves to our new “family” for the next five days, we became more comfortable.

The following days were filled with so many wonderful moments interacting with the community leaders and the athletes of the different towns as we carried the Flame of Hope throughout New Jersey, New York and Pennsylvania that I could go on forever about it. I won’t, I but would like to share the moments that impacted me the most.

As a team, we were invited to the morning news show, Fox and Friends. It was rainy, freezing cold and windy. We wore our running uniform that consisted of shorts and a tank top. The hosts, Elizabeth and Brian, were truly amazing to talk to and made it all worth it. They asked us all kinds of questions and were very intrigued with Special Olympics and the Law Enforcement Torch Run. Next, we ran to Toys R Us in Time Square. This part of the run had the most impact on me.  As we ran down the street and approached the Toys R Us, there was a huge crowd outside cheering as we ran up for the first ceremony of this four-day run. There were several Young Athletes and their parents waiting for us. As we approached, I noticed a father holding his young son and tears were running down his cheeks. As we stopped for the ceremony, he thanked all of us individually for raising awareness for Special Olympics. He said without the Young Athletes Program in New Jersey, his kids would not have the abilities and skills they have learned through the program. It was so hard to hold back the tears of joy I had when I speaking to this father and his family, so I didn’t. Yes, police officers do cry.

We were truly blessed to meet all kinds of amazing people and law enforcement officers throughout all the towns we visited. We saw the many historical sites New York, New Jersey and Pennsylvania have to offer.  We had ceremonies at the Statue of Liberty, at the 9/11 Memorial and the Liberty Bell.

As the week went on, the days became longer and the nights became shorter. We became tired and a little sore, but each ceremony had just as much energy as the first one, if not more. Our support staff was always there with a snack, water and, of course, Advil! The imaginary bubble had disappeared and I had the honor of talking to law enforcement officers from all over the country and sharing ideas with them during our bus rides to the next ceremony. At the last minute, the director of the ceremony changed the plans and told the officers that we would be escorting our states into the ceremony. There were officers from all 50 states there and this was going to be the first time in the history of an Opening Ceremony that the officers were going to lead the delegations in. This was a huge honor for me and I was very excited!

While we waited for the Parade of Athletes, I was able to interact with Team Illinois, talking and joking with them. I spoke with our amazing volleyball team, some of the awesome female swimmers and the incredible coaches. When it came time for Illinois to be announced, I’m sure we were the loudest team entering the Prudential Center that day and I was so honored to be part of that. I had the best experience of my life just hanging out with Team Illinois and being part of the USA Games Torch Run!

I’m so grateful to have been part of this amazing event and to meet all my new friends along the way.  The athletes are truly heroes and I wish more could be done to bring awareness to Special Olympics.  The impact it has on the athletes is incredible. If you have the opportunity to attend a Special Olympics event, you should definitely attend.  It doesn’t have to be the Summer Games held in June, there are events and competitions all year long as well as the fundraising events hosted by the Law Enforcement Torch Run for Special Olympics Illinois. I would encourage everyone to get out there and raise awareness for Special Olympics!