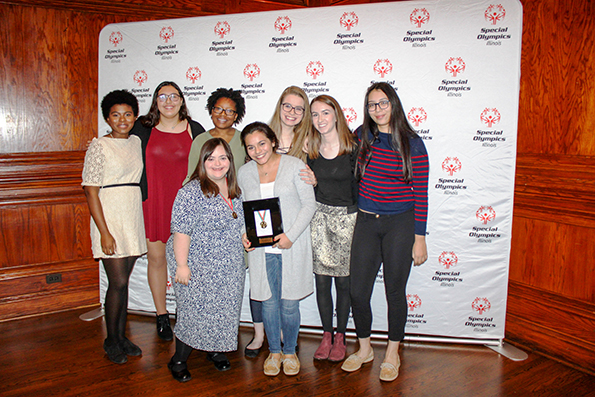 The event coincided with “Giving Tuesday” – a holiday geared towards generosity and goodwill – and celebrated those whose support has benefited literally thousands of children and adults and their families.

After a delicious dinner and a few remarks from staff members, Special Olympics Illinois athlete and Global Messenger Allie Reninger gave an inspiring speech to the guests, then it was on to the award presentation.

The first award of the evening went to Trinity High School in River Forest. Their student body gives an average of over 16,000 hours of community service to the community. Trinity High School has designated the Special Olympics District Bocce tournament hosted by Area 5 as their Senior Class Service Project, and for the last 11 years the entire senior class of Trinity High School has volunteered their time at the District Bocce Tournament – rain or shine. Some year’s bocce has been the day after their Homecoming dance, and the entire senior class still comes out to volunteer. This District Bocce tournament has continued to grow because of the hard work and enthusiasm these high school girls have put into the event.

Rick and Sharon Hernandez and their General Mills crew also received a Hero Award. General Mills started working with Special Olympics in Area 2 in the early 1990’s through the efforts of a General Mills employee Jim Birkner, who was the parent of a Special Olympics athlete. The company provided volunteers and several years of generous grant support funding. Rick first got involved in 1992 and later took charge of the General Mills crew. He created a group that has a great time while keeping focus on the athlete experience. Though the doors are closing on the West Chicago General Mills plant this year, Area 2 is confident Rick will make sure Softball Throw Area C carries on for the Spring Games athletes.

Thank you to Maggiano’s Schaumburg for hosting this event each year. Congratulations to all the award winners.